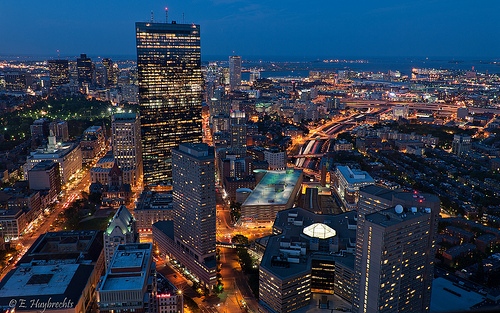 Dennis Lehane, author of gritty Boston-based novels-made-into-movies like “Gone Baby Gone” and “Mystic River”, writes in the New York Times today that whoever perpetrated the Marathon bombing on Monday has messed with the wrong city.

Now, Lehane points out that this isn’t puffed-up bravado, but an acknowledgement that Boston, as a city, doesn’t get pushed off its axis very easily. For all our problems (and in this case I include everyone within 50 miles of downtown as Bostonians), Boston is a city of tough people. Deep down, we’re still the resilient New Englanders who settled this land, with its inhospitable winters and farmland that grew so many more rocks than plants that centuries-old rock walls still demarcate old farm boundaries long since turned back into forest.

Lehane puts to rest the notion that he’s seeing the city through rose-colored glasses by reviewing his vivid memories of the busing-related race riots of the 70s. But Boston today is tough. We won’t let whoever did this make us do more than stumble a moment. The Marathon will go on next year. Boylston Street will re-open. We will mourn, we will console, and we certainly won’t forget. But we’ll go on.

The best of Boston was on display on Monday as moments after the explosions people were seen running toward the explosions, not away. And not just the first responders whose job it is to display such courage, but also Marathon volunteers. Medical tents set up for dehydrated runners immediately became triage centers. Off-duty medical personnel and cops and firefighters immediately headed into work without being called first. Hospitals swung into motion to save people grieviously wounded and did it so effectively that everyone who made it to through a hospital door has survived so far. Yet, Boston carried it off without braggadocio.

Boston’s not the only city like that. Our bigger brother to the south, New York City, has proven itself as resilient. Texas has the well-deserved warning, “Don’t mess with Texas.” But Boston is among them today. We are strong and we won’t let them change us.