My story begins in Europe where three out of my four grandparents were born. My dad's parents were from a town on the southeastern side of Sicily called Augusta. My grandfather's family were all fishermen and so was he and the first time he came to this country was at the turn of the 20th century when he was 12 years old. Later, after getting married and having a few kids, he brought my grandmother and the family over to live in Boston. My mom's father was from Russia and he was Jewish. In fact, his father was a rabbi. They emigrated from Russia in about 1910 to get away from the persecution of Jews. And my mom's mom was French-Canadian (and English and Scottish and Irish, but mostly French) and was born here. 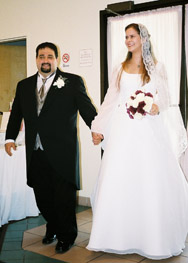 Skipping ahead a whole bunch, my parents were married in 1959. I have two brothers, two sisters, three half-sisters, ten nieces, eight nephews, two step-nephews, a grand-niece, and several more step grands (at present). My parents divorced when I was in high school, but they were on good terms by the time my dad passed away in 2022. My brothers and my sister Evy are all married.

Oh and me? I was born on Halloween in the late 60s. Yes, I know, "Trick or treat." It's an old joke. We lived in Jamaica Plain, a neighborhood of Boston, until I was four and then we moved to the suburbs. Specifically, the town of Canton. I grew up there. It was okay, if a little quiet. Basically, when we were kids we had the choice to either hang out at the variety store or hang out at the mall. Wooh! I graduated Canton High School in the mid-80s with decent grades.

I went on to Boston University where I majored in aerospace engineering and joined the Navy ROTC program. You see, I really wanted to be an astronaut, and the best way was to become a military pilot first. Well, it didn't work out too well. I didn't have a scholarship and I was still too immature for the responsibilities of college and slacked on my school work. Long story, short: I didn't flunk out but my grades were so low I didn't qualify for a scholarship or grants and couldn't afford to go back.

It was off to the work force for me. I eventually got a job working in a factory making juice dispensers (you know those machines in the movie theaters that spray the juice in a big clear bowl on top of the machine?). I worked there for two horrible years while I struggled with lack of motivation and worry that I wouldn't figure out what I was supposed to do with my life. After that I worked at a Christian book and church supply store. That was a much better environment and I worked there full-time for two more years. By then I figured that if I was going to accomplish my goals and live up to my potential I had to go to college and move out of the house. I started by going to Massasoit Community College for a year during the day, while working nights at the Christian book store. After that I got accepted to Franciscan University of Steubenville in Ohio, a small, very Catholic liberal arts college in the heart of the Rust Belt.

The year was 1992. I'd had no intention of moving to Ohio when I was considering schools, but for some reason the name just kept coming up and I sent off an application on a lark. The more I thought about it, though, the more I wanted to go. Finally, after praying a novena to St. Joseph, I found out I was accepted. In fact, the acceptance letter came on the feast of St. Joseph, the last day of the novena.

My four years in Steubenville were the best of my life. I made amazing friends, took fantastic classes, and generally had a great time. I consider those years as the time when I really and truly grew up. I didn't want to leave at the end, but it was either move on or stifle myself. During my time there I was editor of the school newspaper, which helped me greatly in my next job. I graduated with a bachelor's degree in theology and I did most of the work toward a master's degree. I didn't finish because I had a new job working for Catholic World News and I couldn't afford to take out more loans to stay another semester and finish the degree. That's okay because I had what I really wanted-- the knowledge I'd gained.

I moved back to Massachusetts to be closer to home, although my job allowed me to live basically anywhere, since I worked from a home-office. I ended up in Salem because my friend Randy Reinbold had been offered a job as youth minister at Immaculate Conception Parish. We'd agreed to get an apartment together when we moved there, but Father Murphy, the pastor offered to let Randy live in the big rectory. After Randy told him about our agreement, Fr. Murphy said I could move in too. In the Spring of 2002, I moved out and no longer had to answer awkward questions about why I lived in the rectory (ex. "Are you going to be a priest?" "Um, no, I'm just renting a room.") 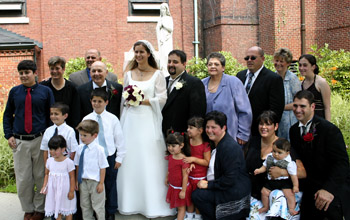 In those years I made some more good friends, including Peter Campbell, who I introduced to my sister. They married in 2000 and now have eight children. My brother Bernie is the oldest of my siblings. His first wife, Kathy, died in 1992 and they had a girl, Mary. Bernie married again, this time to Carol. She has two sons, Jared and Sam. My brother John and his wife Patti have four boys, Peter, Joseph, JohnPaul, and Domenic, and two girls, Catherine and Theresa. My sister Francesca is single and lives in Maine.

My parents were divorced, and my dad remarried but his second wife died in 2017. They had three girls, Amanda, Angela, and Christina. My dad died at 89 years old in September 2022.

On August 13, 2005, I was married to the lovely Melanie Scott, a brilliant woman who is from Austin, Texas; attended the University of Dallas and Boston College; and now stays at home with our five children, Isabella, Sophia, Benedict, Anthony, and Lucia. I have some great in-laws as well, including Melanie's parents, her two brothers, Tim and Stephen, and sister, Theresa, and Tim's wife, Amber, who's expecting their first child in February 2023.

And who am I? I'll try to briefly describe myself. I'm a techno-geek. I love gadgets and technological toys, including Macintosh computers. I helped found Catholic World News, the first online Catholic news service back in the mid-90s. I was briefly the editor of Catholic World Report magazine, an international Catholic news magazine. I used to work for the Archdiocese of Boston, first in fundraising, then as Creative Director for New Media and producer/co-host of The Good Catholic Life, a daily radio program, and then as communications director of a collaborative of parishes. For a couple of years, I was the Director of Community Engagement for Massachusetts Citizens for Life. Now I am CEO of SQPN, the StarQuest Production Network, a Catholic podcast network that produces a variety of shows that explore the intersection of faith and pop culture, including a podcast I do with Melanie called Raising the Betts.

I read all kinds of books, but for fiction it's mostly science fiction and fantasy and military techno thrillers (think Tom Clancy, Vince Flynn, Mark Greaney). I also like American Revolutionary War history and books about the background of everyday things. I have also been enamored of Patrick O'Brian's Aubrey-Maturin series of novels about the Age of Sail, the British Navy at the beginning of the 19th century.

I subscribe to a handful of different magazines, mostly cooking magazines. I enjoy a wide variety of music from Frank Sinatra to Eric Clapton to Jimmy Buffett to Luciano Pavarotti to Steven Curtis Chapman to various country music stars and so on. I like handmade cigars, fine wine, and dark beer.

In addition to Raising the Betts, I make podcasts for my job at SQPN, like Jimmy Akin’s Mysterious World, Secrets of Star Trek, Secrets of Doctor Who, Secrets of Movies and TV Shows and Secrets of Technology.

I love to cook, and I experiment all the time with new recipes and new ingredients, rarely following a recipe exactly, but looking to improve it a little here and there. It's my creative outlet. I drive Melanie crazy; she says I'm a kitchen geek because I'm always looking for the perfect pot or pan or tool. My favorite cooking shows were Alton Brown's "Good Eats" on the Food Network and "America's Test Kitchen" on PBS, produced by the same folks who produce "Cook's Illustrated" magazine.

My favorite book of all-time is The Lord of the Rings, by J.R.R. Tolkien. I've read it at least 18 times since fifth grade. Other favorites include Tom Clancy's Jack Ryan novels, which have been taken up by other authors since his death. There's also the aforementioned Aubrey-Maturin books and S.M. Stirling's alternate history books. The science fiction The Expanse series is also very, very good, but has sadly completed its run. In recent years, I've indulged my interest in secret agent fiction with Mark Greaney's The Gray Man series and Vince Flynn's Mitch Rapp series. Lately, I've been reading Jim Butcher's The Dresden Files and Brandon Sanderson's Stormlight Archive series. Find out more of what I'm reading at my GoodReads profile.

It's hard to choose just one, but my favorite movie (series) is Star Wars (excluding the prequels), although if you ask me tomorrow I may give a different answer. (Lord of the Rings should be up there too, but I lump it in with the books. Same with The Hobbit.) I also like Braveheart, some of the Star Trek (including the J.J. Abrams' reboot), Gladiator, most Jackie Chan movies (not so much the Chinese-language ones), Saving Private Ryan, Schindler's List, Master and Commander, the first and third Indiana Jones movies, and among the classics: The Adventures of Robin Hood starring Errol Flynn, The Charge of the Light Brigade, and Gunga Din.