Hitting the ground running in my new job
3 comments
Share:FacebookTwitter
Archdiocese of BostonInternetTechnology

Hitting the ground running in my new job

Today was my first official day working in my new job in the New Media & Initiatives office of the Catholic Media Group of the Archdiocese of Boston. I’d mentioned a month ago that I would be leaving my job as manager of gift processing & donor relations at the Catholic Foundation of the archdiocese to take up this new job, which I think is much more up my alley, in terms of my talent and skill as well as the type of work I’d like to do.

And so while today was my first official day on the job, I actually began doing the job yesterday. In case you missed the news on Wednesday, Pope Benedict appointed two new auxiliary bishops for Boston. We found out only the day before that the announcement was coming (although we weren’t told the names), and we had to scramble to pull off the press conference. And by we I mean the Catholic Media Group, working in conjunction with the Cardinal’s Office and the secretary for communications. We’d been anticipating such an announcement for months, just based on the retirement of several bishops and vacancies of the usual spots. But it wasn’t until Tuesday that we can take action in earnest.

One aspect of the press conference I was hoping we’d do is use as much new media as possible to connect all those interested people outside the Pastoral Center with the event going on in it. So, we developed a plan to use Facebook and Twitter for live updates throughout the press conference, and Flickr for live photoblogging with photos being posted automatically during the day. The last piece to come together was a live video stream. I’d been hoping to use live video of some event as a proof of the concept and this was the perfect opportunity. 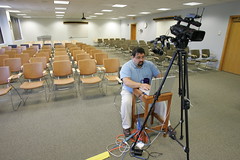 Unfortunately, I’d never had a chance to test it. For technical reasons, I had to get MIS to prepare the network for the stream and I couldn’t get that approved until I had a sufficient reason for it. This press conference would be it. So I quickly set up a Ustream.tv account for us at Ustream.tv/BostonCatholic, downloaded their software, connected our very nice HD-capable Canon XH A1 camera, and started making it work. You can see me in this photo in the large auditorium prior to the press conference getting everything set up and in place. By the time the event started I was surrounded by other media people and well-wishers attending the press conference.

During the event itself, I found myself operating the video stream’s control board (changing graphics and lower thirds to suit the moment), writing new updates for Facebook and Twitter, and creating captions and organizing sets of all the photos streaming into Flickr. I’m glad I didn’t try to operate the camera too. It was almost too much for one person, but I automated much of the writing by using some clever shortcuts with the text-expansion utility, TextExpander.

The one drawback was that for most people watching the stream, the video had a bit of a stutter. I didn’t see it on our internal network, but outside viewers did. I believe it was because I was trying to push a stream of too-high quality. If I’d had more time to test, I might have backed down the stream a bit.

Fortunately, we were simultaneously capturing an HD-quality copy of the video in the camera and after the press conference we were able to upload that to our account at Vimeo and replace the archived stream from Ustream with this HD version on our main web site at BostonCatholic.org. By the way, notice the neat thing our web developers did with the web site. Instead of replacing the front page of our site with a special “breaking news” page, they put a kind of overlay on it so that if you click the close button in the top right, the overlay goes away and you get our regular home page again. I thought that was a good idea.

Anyway, I think the whole thing came off very well and I look forward to doing much more of this for all kinds of events. The next big one on the schedule is the ordination Mass for the new bishops, scheduled for September 14. I don’t know if we’ll be able to live-stream it because I’m not sure the cathedral has broadband in it, but I’m sure we’ll be posting Twitter, Facebook, and Flickr updates.

Now this is a lot of fun.