Google PhotoScan May Let Me Finally Digitize This Box of Photos
Share:FacebookTwitter
Macs, iPods, and iOS

Google PhotoScan May Let Me Finally Digitize This Box of Photos

Update: See the end of this post for more information
[lead dropcap="yes"]Google has released a new iOS and Android app called PhotoScan that lets you quickly digitize a print photo and get into your Mac Photos and/or Google Photos libraries. Watch the the video for an amusing introduction to how it works, but basically it works better than simply taking a photo with the phone’s camera by eliminating spot glare.[/lead]

Anyone over a certain age has a box of printed photos somewhere in storage, in an attic or garage or shed or closet. And like most of those people, for years I’ve resolved to scan those photos into the computer, saving them for posterity and saving all that space. Ask anyone who’s suffered a devastating property loss through fire or flood or other disaster and you’ll hear that the biggest loss—apart from loss of life, of course—is the loss of photos. So I want to get those photos out of the box and into my computer and backup drives and cloud backup. Plus, having the photos in digital form means we’re more likely to see the photos in screensavers than we’re likely to pull out the box and start pawing through.

I’ve tried many times to start scanning. I’ve had flatbed scanners of various qualities, sheetfed scanners not really made for the purpose, multifunction printers. While the quality can be good, it takes forever to scan each photo. And I’ve looked into those services where you send in your photos and they scan them, but they’re expensive, you’re sending your precious photos through a delivery service usually overseas, and you still have to go through the photos to cull out the good ones from the duplicates, the blurries, and the shots out of airplane windows.

But in 30 minutes with PhotoScan last night, I scanned 57 photos, skipped dozens more, and then color-corrected and edited the photos I scanned. These photos are now safe in iCloud Photo Library, Google Photos, and Amazon Prime Photo. And I’ve—horrors—tossed nearly all of them in the trash, although I have kept a couple that I think are especially nice in their current form and would stand to be scanned using a higher quality process.

Some may think I’m crazy for throwing away the originals, especially since the PhotoScan process does not result in the highest quality digital photo, but here’s my thinking: If I never scanned the photos at all, they would remain in their boxes and envelopes, slowly fading and discoloring and decaying and soon enough their quality would soon be even worse than the scan quality. Meanwhile, I’m keeping all the negatives because they take up so little space on their own. And honestly, I’m no Ansel Adams. The world will not be worse for the lack of high quality scans of my vacation and college photos from my single days, even as the photos that document my immediate family’s history was digital from the beginning.

PhotoScan is quick and easy and worth a try. Meanwhile, here's a sample of the results of the scan below, a photo of my brother John in Paris in 1997 during World Youth Day. 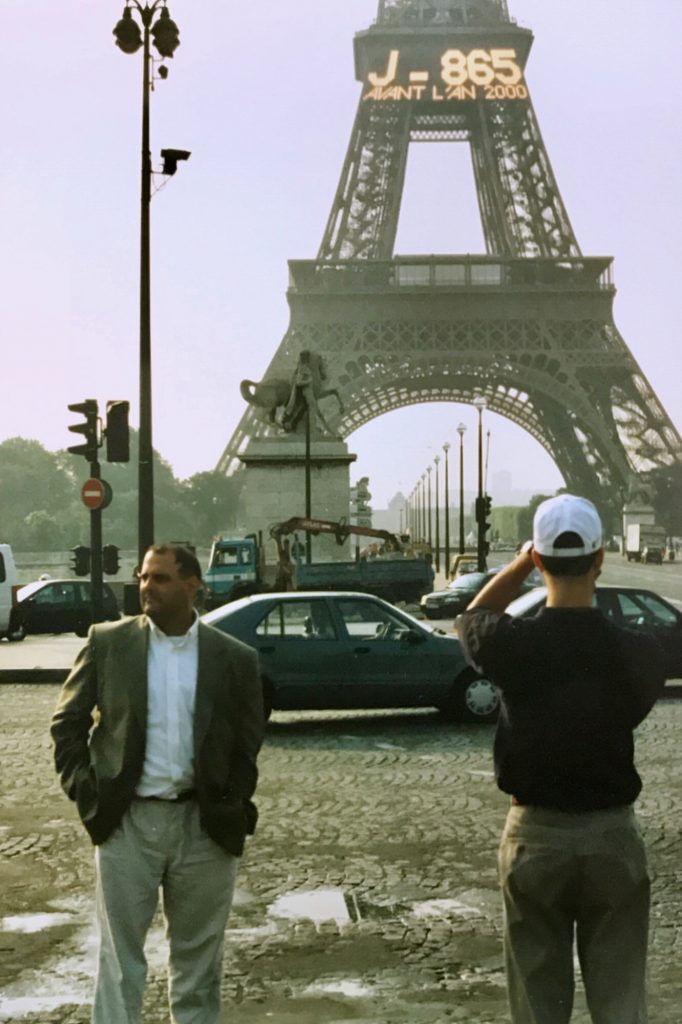 Update: I realized after I'd posted this that I hadn't tried scanning photos with my newer Fujistu Scansnap IX500 so I decided to run some photos through it. On the Photos setting, I have to admit that it does a better job than PhotoScan. Although there's a few faint lines on the scans, they are sharper than the PhotoScan images. Plus the sheetfed scanner can scan 50 photos continuously without intervention, making it much faster.

So I'll use the Scansnap for my regular photoscanning needs, but PhotoScan will still be useful for when, say, I'm at my moms or brothers and they bring out their old photos.