I’m sometimes asked about my podcasting workflow, how SQPN goes about recording, editing, distributing, and promoting our shows. This is the third in a series of posts that explain the multiple steps that take me from the beginning to the end of the process for each show we produce. The first post was about my hardware setup and the second was on research, prep, and organization.

[lead dropcap=”yes”]When it comes time to record a show, I rely on a couple of pieces of software. Now, I know some podcasters prefer to record only to a hardware audio recorder as a failsafe against a software crash taking out the whole recording. But that was back in the days when Skype was a lot less stable than it is now and more prone to crashing and taking everything with it. I also think those people tended to be recording on Windows.1[/lead]

My main recording software is Audio Hijack from Rogue Amoeba. This is modular software that allows you to construct an audio workflow using block-like structures. It works in conjunction with another Rogue Amoeba product called Loopback, which allows you to route audio in non-standard ways around your computer.

Here’s the Audio Hijack session I have developed for use with Skype and group podcasts2:

And here is the breakdown. The top portion is the incoming audio to be recorded. On the top branch from the left, we have the Skype incoming audio. For best quality, we prefer that each participant record their own audio locally and send it to us to be synched up in editing3. But to help the synching process and to act as a backup in case of troubles for the individual panelists, I also record a separate local track of only the incoming Skype. The key to separate recording is in the preference for the Skype block (which you get by clicking on it), where you should make sure that “Include audio input” is unchecked4. I also have Evernote as an audio block here because I have occasionally played audio feedback from listeners that was stored in an Evernote note. That doesn’t happen as often now that I have Farrago (also from Rogue Amoeba), which is soundboard (or sound cart) software, which lets me play and control music, bumpers, sound clips, recorded feedback, etc. This gives me a separate track for that audio that’s the same length as the others and makes it convenient to synch up with the other tracks.5

Those blocks connect to an output block that sends the audio to my headphones. This is where I hear the conversation from the others on the podcast and any clips or sounds I play. From there it feeds to a recorder, where it is recorded as an uncompressed WAV with a time and date stamp and a label of “Skype.” There is also a headphone output after that where I can hear the Skype track and my own track combined for troubleshooting purposes.

The bottom branch of the top area is the recording of my voice, coming from the mixer (labeled “USB Audio CODEC”). After that is the AU Dynamics Processor, which acts as a kind of noise gate. 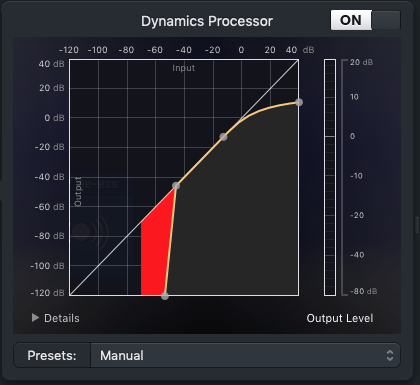 The red area is a representation of the ambient sound in my office (computer fans, hard drives, etc.). By moving the vertical yellow line, I’m telling Audio Hijack to ignore any sound until it reaches that threshold. The curve at the top end tells it to cap how loud sound can get in the recording so if I yell at the top of my lungs it won’t blow out people’s ear drums (or more likely result in distortion and clipping). Of course, once the gate is open, that ambient sound is present in the recording, but hopefully the sound of my voice is drowning it out. If not, we will take care of it in post-processing during editing.

And of course, there is another recorder block to record my voice stream.

The lower portion of the session is my audio feed to Skype. There’s another input device from my mixer, but I’ve had to put in a volume block to lower my gain as Skype was picking it up too hot. Evernote and Farrago are there as well so that my co-hosts and guests can hear the sound clips. They feed through another AU Dynamics Processor noise gate, which isn’t strictly necessary for the final recording, but is hopefully making me sound better for my guests. And then the output device is Loopback.

Loopback is sound-routing software that can a lot more than I’m using it for. In my case I’m aggregating the audio output from Audio Hijack into one-stream that becomes the audio input for Skype. Honestly, I’m probably under-utilizing it, but for now it just works as a pass-thru to Skype.

At the moment, we use Skype as our main conversational tool. I prefer it over audio-only talk software because so much non-verbal communication among participants is lost without it. It’s much harder to know when to jump in or even if someone is having a problem. I will sometimes gesture to the panel that there is five minutes left, for instance. Or if I see someone start coughing (after they’ve muted their mic), I can just jump in and keep things moving until they recover.

The audio settings are set so that microphone input is Loopback. The output goes to the built-in sound for my iMac and I listen to the Skype call over my headphones plugged into the headphone jack. That takes care of all the audio routing for me. 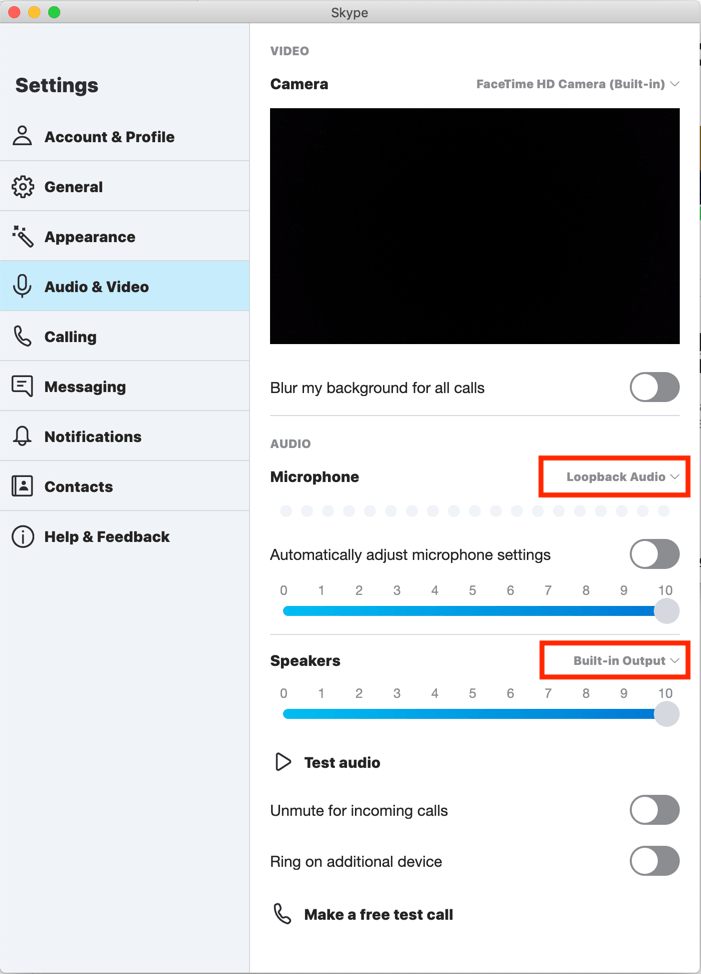 When it’s time to record, I start the Audio Hijack session, which automatically starts any recording blocks, but I pause those until we’re past any preliminaries. With this setup, the session does need to be started for me to be heard on Skype. I then ask the panelists to start their recordings and I start my recordings and away we go. When the recording is done, I pause the recorder blocks and then save the audio files locally and wait for my co-hosts to send me links to theirs (usually Dropbox, but sometimes via OneDrive or Google Drive.)

I used to have everyone count down to clap at the beginning in order to put a spike in the waveform that would help with synching up, but I found I didn’t need it after a while (mostly because I could match them up using the Skype track I record) and it eliminates an unnecessary step.

In the next post, I will discuss how I edit a show and then the steps to prepare it for upload, distribution, and promotion.

Raising the Betts #155: A Night at the Ballpark

Raising the Betts #154: Persistence in Prayer

Raising the Betts #151: Lambs Before Wolves