Death of an Adjunct Professor 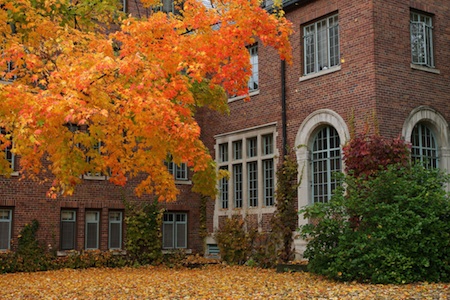 [lead dropcap="yes"]When Melanie and I met she was teaching English as an adjunct professor at Salem State University and getting paid pauper’s wages. She lived simply and worked a side job as a waitress for a catering company. After she got pregnant with Isabella that quickly came to an end as the rigors of morning sickness overcame her ability to teach her 8am classes. Nevertheless, I got an up-close look at the situation of adjunct faculty in higher education.[/lead]

Sad to say, the situation of this poor woman who died a penniless pauper after 25 years as an adjunct at Duquesne University in Pittsburgh is not surprising given what I knew of Melanie’s situation.

[U]nlike a well-paid tenured professor, Margaret Mary worked on a contract basis from semester to semester, with no job security, no benefits and with a salary of between $3,000 and just over $3,500 per three-credit course. Adjuncts now make up well over 50 percent of the faculty at colleges and universities.

Meanwhile the university’s president makes $700,000 per year and this Catholic institution cast this 83-year-old woman aside when she had no money to heat her home and she was found sleeping in her office. Rather than finding ways to provide charity, they had police remove her from the premises and she was fired.

Now the union official writing this op-ed claims that if only Duquesne allowed its adjuncts to unionize as they have at Georgetown, another Catholic school, everything would be better for adjuncts. I’m not so sure.

In fact, the faculty at Salem State, a taxpayer-funded school, were unionized too, but it didn’t do a lick of good for Melanie. Sure, she got an extra $500 per semester, but she was still getting below-poverty level wages, no health benefits, and scant pension benefits, while being required to shell out union dues. The union primarily benefitted full-time, tenured faculty–and the union bosses themselves, of course.

At the same time, I see another pertinent dilemma: On the one hand, student loan debt has expanded enormously over the past decade even as the rising cost of tuition has vastly exceeded the rate of inflation over the past three decades. On the other hand, we have near-slave wages being paid to those providing what are presumably the most fundamental and foundational classes for most freshmen and sophomores: English, languages, humanities, math, science. So where is all this money going?

While most of the massive expansion of college facilities–new buildings and stadiums and the like–is paid for through specific fundraising through capital campaigns, the upkeep and maintenance of these new facilities surely comes from general budgets. Not to mention the fact that those capital campaigns divert funding from scholarships and financial aid, not to mention decent salaries for adjunct professors.

Then there are the tenured faculty, who get much larger salaries while they teach fewer courses in favor of research and even then the courses they do teach end up being along the lines of “Gender stereotypes in DC Comics of the mid–20th century” or the like. And let’s not forget the bloated bureaucracies:

[University of California’s] annual spending [of $24 billion] exceeds that of most state governments, amounting to roughly $100,000 for each of its students. Much of this is unrelated to instructional function. The university’s bureaucracy is famously monumental, centralized and costly: Aside from a full cohort of administrators and support staff at each of the 10 campuses, the central office in Oakland employs more than 2,000 workers, a staggering number (2,358 full-time employees, according to the Integrated Postsecondary Education Data System). There are 10 “divisions” in the Office of the President, for example. Its “external relations” division lists more than 55 managerial-type employees on organizational charts, and that number doesn’t include support personnel.

The “business operations” and “academic affairs” divisions are much larger. One senior non-UC university president said to me once that the central office could be reduced by more than half and the university wouldn’t suffer.

I’ve written before about the higher-education bubble, akin to the housing bubble we had a few years ago. There is an ever-increasing supply of colleges and of undergraduate slots at those colleges even as the birth rate has declined over the past several decades, reducing demand for those slots. Meanwhile, the costs of tuition have spiraled upward, causing students to take out ever increasing debt loads to pay for it as their prospects for decent jobs after graduation have plummeted, putting their loans “under water.” All of it is propped up by government promises and guarantees on the faulty premise that everyone should have a college education. Sound familiar?

Our priorities are all screwed up and higher education has become an unmanageable beast, gobbling up incredible amounts of resources–not just the tuition itself but the billions of dollars of interest paid on those loans to, yep, big banks–and also devouring the hundreds of thousands of liberal arts majors and others who dreamed of becoming a tweed-jacketed tenured professor on some ivy-bedecked campus who spends his days regaling bright-eyed undergrads, mentoring aspiring grad students, and engaging in fulfilling and important research. If they're lucky, they instead end up shuttling from community college campus to public college, stringing together an impossible course load – don’t forget the papers and grading!–in order to eke out a living. The unlucky ones abandon their academic discipline all together as they take whatever job they can.

It’s got to end and the sooner this beast is slain the better. Frankly, half of the young people I encounter regularly in the workforce would have done just as well to skip college and receive on-the-job training while saving $100,000 or more in debt. My own children may do the same.