Who Are These People In These Stories?
1 comment
Share:FacebookTwitter
Media

Who Are These People In These Stories? 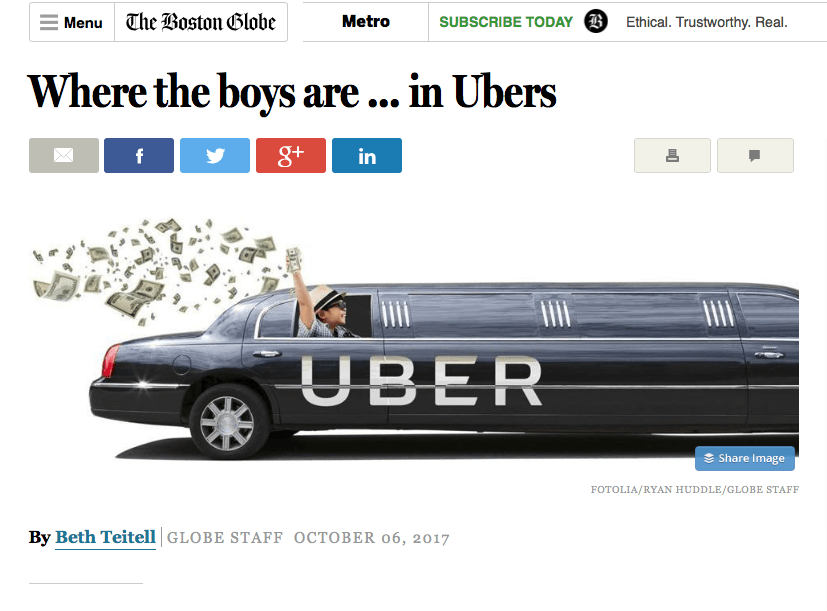 [lead dropcap="yes"]Beth Teitell is a “life in these modern times” reporter for The Boston Globe, who writes stories about the foibles and challenges of the fast-paced technological era we live in and how “ordinary” people cope1, often with a dollop of humor or irony. Some of her recent articles have focused on millennials ordering fast-food takeout instead of cooking their own meals; families texting each other within the same house or even the same room; teen boys who regularly take Ubers, usually prompted by parents too busy to drive them around; the fact that $1 million in Boston buys you a fixer-upper; the phenomenon of the “she shed” as a reaction to man caves; and so on.[/lead]

The ever-present common elements in almost every story include:

The story that prompted this post was her article on parents relying on Uber to shuttle their kids to and fro instead of doing it themselves. What’s ironic is that I just remembered that three years ago today, I wrote a similar post about an article Teitell wrote about the ways that pre-Uber carpooling had taken over the lives of these well-heeled families and I see how both articles unspool in the same ways.

As I read these articles, I’m left scratching my head. Who are these people? Is this supposed to be what passes for middle class family life in the Boston area? Because none of these stories ever look like me and my family or any family I know.

If these do reflect a widespread reality, they make me tremble for what we’re doing to ourselves. The disconnection among family members, the barely concealed annoyance with family, the me-first individualism, the entitlement attitudes, the life-altering stressfulness: Is it any wonder people are feeling fractured and unrooted and dissatisfied more than ever before?

I wonder if this is a coastal or big city or Northeast phenomenon or if it’s fairly universal. But while it makes me worry about our country, at least I feel pretty good about how we’re doing as a family.