Web Apps I use: Evernote 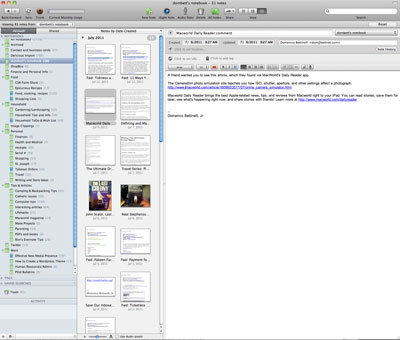 On the new social media website Google+, I’ve seen some conversation from people who are discovering Evernote and I thought I’d write about how I’ve come to use it. I’ve written about Evernote before:

But I’ve never done a writeup just on the service itself and how I use it.

Notice that I called Evernote a “service”. It’s not just a piece of software, but instead it’s a sort of ecosystem that becomes a backup for your brain. Here’s how Evernote describes itself:

I have Evernote on my personal Mac, my work Mac, the Mac in our kitchen, my iPhone, and my iPad. Plus Melanie has Evernote on her Mac and her iPhone. It’s everywhere. (And if you use Windows computers or have a BlackBerry or Android phone, you can get Evernote there too.) So how do I use it?

For one thing I clip webpages I want to keep into it. Every time I do a web search for something I think I might need to find again, I clip it into Evernote. They have extensions for all the major web browsers that make this easy. It’s especially nice in the Chrome browser because it will offer to save just the URL, grab the whole page, or intelligently clip just the relevant data. In addition, whenever I do a Google search, the extension also searches Evernote for the same words and lets me know if I’ve already got notes that match my search.

Evernote synchronizes my data between my local software and company’s servers so that it can then automatically send that data to all my copies of Evernote. They also add search data for any images in your notes. That’s right, Evernote doesn’t just search text, but also searches photos and PDFs. When I get business cards I take a picture of them either with my phone’s camera or my Mac’s webcam and save them to Evernote. When I need to find that person’s phone number later I just type their name in to Evernote’s search and up it comes.

I have a document scanner at home and often scan bills or other important correspondence that I need a record of, but don’t need to keep the physical copy, and then put that in Evernote. Then I shred the paper and keep from having an overflowing file cabinet.

Here are some other ways I use Evernote: 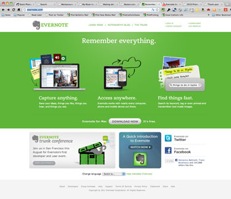 The possible use cases go on and on. The best part is that Evernote is free, but not in the “free, but not useful until you pay” manner. The premium, paid version gives you even more awesome features, but the free version is completely usable. The difference is that for $5 per month, you get 1GB per month of uploads, instead of 60MB; You can put any kind of file in Evernote, whereas for the free version you can only attach images, audio, or PDFs; you can read and edit shared notebooks on the website instead of just read; The maximum note size if 50MB instead of 25MB; and your scanned PDFs are searchable.

I’ve only just scratched the surface of what Evernote can do. They have something called the “Evernote Trunk”, which is a program in which they’ve partnered with many third-parties to integrate Evernote into their hardware, software, or web-based products and services. The Evernote blog is also a great repository of tips, tricks, and use cases to inspire you.

Th whole point of Evernote is let you offload from your brain the stuff you need to remember, but have trouble keeping track of. It’s worth trying it out and seeing if it can fit in your life. I think you’ll find it can.