Unto you a child will be born, the Son of Promise
5 comments
Share:FacebookTwitter
National politicsPolitics

Unto you a child will be born, the Son of Promise 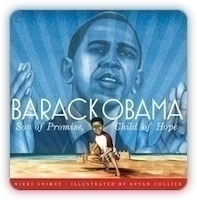 If you’re creating a new messiah, then you’ve got to have the requisite hagiography/infancy narrative. The Obama Messiah blog points us to this children’s biography of Obama, designed to indoctrinate the younglings early: “Obama: "Son of Promise, Child of Hope"”. (Check out the whole tongue-in-check blog to see the very disturbing imagery often used by those who imagine Obama as a secular savior, not the least of whom are the journalists who are supposed to be objective!)

Witness the way in which Obama is portrayed in this summary of the book. Note how “Hope” is capitalized the way we would capitalize “Holy Spirit”, i.e. as a Person. Note how he is lifted onto a pedestal as being unlike the rest of us mere mortals.

Ever since Barack Obama was young, Hope has lived inside him. From the beaches of Hawaii to the streets of Chicago, from the jungles of Indonesia to the plains of Kenya, he has held on to Hope. Even as a boy, Barack knew he wasn’t quite like anybody else, but through his journeys he found the ability to listen to Hope and become what he was meant to be: a bridge to bring people together.

I have no problem with someone being an ordinary political supporter, even an ardent supporter, but this sort of thing—and the rest of it chronicled at that blog—goes far beyond support to personality cult or religion. And that’s what scares me about Obama—more so than any other recent presidential political candidate.

Let me be even more pointed. I don’t believe that Obama is the Antichrist of fundamentalist Protestant nightmares, but if you were trying to create the appearance of being the Antichrist and scaring the “fundies” you couldn’t do a much more complete job than this.