Tips for Texans for dealing with snow 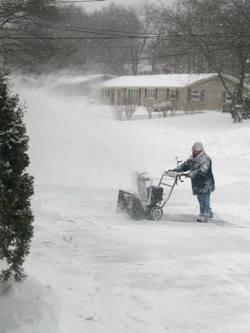 They say Eskimos/Inuit have many different words for snow because it’s such a part of their lives. New Englanders have many different words for snow too, and not all of them are four letters. The fact is that growing up in any of the snowy parts of the country, whether it’s New England or upstate New York or the great snowy plains or the upper Midwest/Great Lakes or the interior Pacific Northwest or the great-granddaddy of them all, Alaska, we, natives of the region take for granted the important lessons for how to deal with the white stuff when it falls in great quantity. It wasn’t until I married a native Texan and her sister came to live with us that I realized how much of what I took for granted needed to be explicitly taught.

Herewith, then, are some important lessons regarding the clearing of snow that has fallen, whether just a few inches or a great galumphing blizzard that buries you in.

There are several important things to know about cars and snow. Driving in snow is such a big subject that it needs its own post, but there’s also plenty you need to know when the big hunk of metal is just sitting in your driveway getting buried.

For one thing, preparation is important. Always make sure you have at least a half tank of gas. As soon as you hear the forecast of a storm of more than an inch or two, ensure you’ve got enough gas in the tank. For one thing, your car will spend a lot of time idling as you clear your driveway. Almost every community in snowy regions bans on-street parking during a snow emergency so that the plows can get through. (Some big cities don’t because there isn’t any place to put all the cars. More about on-street v. off-street parking in a moment.) If you have more than one car, you’ll likely be doing the driveway shuffle, moving cars in and out of the driveway so you can clear the snow properly. And if the storm is big enough, it may be a few days before a local gas station is open or deliveries of gas can get to the station. You don’t want to be stuck.

Also, make sure your windshield wipers are off when you leave the car for the last time before the storm. My sister-in-law sometimes leaves her wipers on when she turns off her car, but when you turn the car on to warm up while you’re clearing snow and there’s 3 or more inches of heavy wet snow on the windshield, you’ll burn out the wiper motors pretty quick as they try to move a lot more weight than they were designed to. Some people like to leave their wipers sticking straight up in the air before a storm, but I don’t think it’s generally necessarily. If it’s an ice storm (those are fun), it will prevent them from sticking to the windshield, but if you give the defrosters time to work, it’s not a problem.

The other preparation tip is to have a sturdy snow brush/ice scraper at the ready. In the car is fine most of the time, but if you keep it by your front door during a storm, you won’t have to clear your car just to get your snow clearing tool out. (Make sure to put it back in the car when you’re done.) I’ve gone through just about every cheap snow brush there is, but this one

has served me well through last winter and into this one.

When clearing your car, make sure you clear around the grill and the exhaust pipe before starting your car. You don’t want deadly exhaust gases backing up into the car. Be sure to clear off the whole car. I’ve seen crazy people driving down the street with just a small round porthole in the snow in their windshield. No visibility to the sides or behind! Not only is this stupid it’s illegal. Also clear your headlights, your taillights, your license plate and all the windows. Be sure to clear the snow off the top of your car as this is a hazard to other vehicles. You don’t know excitement until a giant slab of snow blows off the top of the car in front of you on the highway, landing on your windshield and blinding you while driving at highway speed.

It is generally frowned upon by most municipalities (i.e. you’ll get a ticket) if you clear snow into the street, whether from your car or a driveway. In a big city where it’s also illegal to throw snow on a sidewalk, I’m not sure where you’re supposed to put it. (Throwing back up toward the clouds doesn’t work well.) In the suburbs, just keep piling it on the lawn.

Again, if you’re not from a snowy region, and you move to one when it’s not winter, you may not understand why locals so value off-street parking when looking for places to live. As I mentioned, many cities and towns ban on-street parking during snowstorms in order to allow plows to get through and clear the streets. In some places, the city opens up public parking lots and garages to let residents park for free. In others, you’re on your own. At our house, our driveway is just wide enough to allow our three cars to park side by side. Don’t think that not having a driveway relieves you of shoveling. You can’t imagine how hard it is to dig out a car that’s had snowplow after snowplow send piles of snow on top of your car so that it looks like a great snow dune. Let it sit for a day and it becomes icy hard. Once you do grasp the arduous experience of digging out a car parked on the street, you’ll then understand the unwritten law of the street that says you can claim your dug out spot for up to 48 hours after the storm. (The time varies by local custom.) The possessor of the spot will often mark it with a trash barrel, a traffic cone, a folding chair, or any handy household item. (I’ve seen some bizarre things out there.) God forbid you should ignore this law because your car (and maybe even you) will experience harsh street justice.

If you have your own driveway and you don’t happen to have the cardio-vascular system and muscles of a triathlete or are over 35 years old, you should consider getting a snowblower. (Sometimes it’s called a snowthrower.) This is not an admission of weakness. Running a snowblower still requires lots of upper-body strength and patience. The difference is that it does most of the work and could save you from a heart attack. Every time there’s a big storm, there is a rash of stories in the local media about some poor schlub who keeled over from overdoing it in his driveway. A snowblower is especially important for the most difficult part of clearing your driveway, the end by the street. When the city plow pushes snow down the street, it is pushing the snow up to the sides, regardless of whether the side is your lawn or your driveway. This is often the heaviest, wettest snow and the iciest and the most difficult to attack. Even with a snowblower, you have to take your time, often eating away at it a bite at a time. We just had 16 inches of snowfall, but with the work of the plows the end of the driveway had more than 3 feet of heavy snow.

If it’s a very windy storm, you’ll also get drifting. The wind will blow the snow into drifts which can sometimes reach the roof of a house while blowing the grass bare in other spots. These drifts can make clearing driveways and walkways difficult. Always work with the wind when throwing snow. You’ll learn quickly that throwing snow into the wind will guarantee you a cold face full of stinging ice pellets.

The big difference between shoveling and snowblowing, besides the time it will take, is that with shoveling it makes sense to get out in the storm after every few inches of snow so you don’t have to shovel it all at once. A snowblower can tackle more snow at once, but keeping up with the shoveling will save your back and arms.

Be a good neighbor

In addition to clearing out the driveway and walkway for your house so you can get out, remember to think of others as well. In some places you are required by law to clear the sidewalk in front of your house or business. It is just plain good manners to clear out your mailbox for the mailman and it’s good sense to clear snow from the closest fire hydrant. You don’t want firefighters to waste time digging it out if you have a fire at your house.

Please check on your elderly neighbors. Make sure they have someone to plow their driveways and walks and knock on their doors to ensure they rode out the storm in good shape.

Most important of all, take it easy. There’s nowhere you need to be in such a hurry that you need to hurt yourself clearing snow. And if it is an emergency, call 911 and let them take you where you need to go if it is really an emergency. If you get socked in with an 18-inch snowstorm and all you have is a shovel to dig out, then your boss will have to understand why you couldn’t get to work.

That’s it for my tips. Have a good tip of your own to share? Please leave it in the comments.

Update: A couple of more tips occur to me. First, make sure your dryer vent on the outside of the house is clear of snow. (At other times of the year, make sure it’s clear of leaves and debris and squirrels aren’t nesting in it.) If the vent is blocked, it can cause heat and gases to build up inside your house, creating a fire and air quality hazard.

Second, turn up the house heat a few degrees if there’s a chance of the storm causing a power outage. We often lower the thermostat overnight to save on energy consumption while we’re warm in our beds. But if the power goes out (which causes most heating systems to stop working, unless you’re lucky enough to have a wood stove), that extra few degrees will buy you a little more warmth before the power comes back.