Presidential fitness and the changing standards of the MSM
1 comment
Share:FacebookTwitter
MediaNational politicsPolitics

Presidential fitness and the changing standards of the MSM 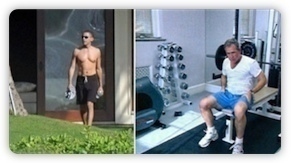 Here’s some more media double-standards. When Barack Obama’s now-famous pecs showed up on the wires (conveniently so, considering no photo is shot of the president or president-elect without express permission of his security cordon), Michelle Malkin points out how we heard paeans to Obama’s fitness regimen shows his fitness for office, yet when Bush was shown to be dedicated to physical fitness it was a sign of misplaced priorities.

For adoring journalists, you see, Obama’s workout fanaticism demonstrates his discipline and balance in his life. Apparently, what’s good for Obama’s glistening pecs is good for the country. Zaslow quoted Obama Chicago crony Marty Nesbitt, who offered this diagnosis: “He doesn’t think of it as something he has to do — it’s his time for himself, a chance for him to reflect. It’s his break. He feels better and more revved up after he gets in his workout.”

Former Washington Post writer Jonathan Chait famously attacked Bush three years ago in an opinion piece for the Los Angeles Times headlined, “The (over)exercise of power.” Recounting how President Bush ran 3 1/2 miles a day and preached more cross-training to a federal judge, Chait fumed: “Am I the only person who finds this disturbing?…What I mean is the fact that Bush has an obsession with exercise that borders on the creepy.”

Obama doesn’t need a White House Office of Communications or a press spokesman. He’s got the whole MSM ready to pour propaganda into our morning cup of Joe every day. And to regale us with the perfection of all things Obama. Like his pecs.