Our EyeFi/Mifi test: How did it go?
2 comments
Share:FacebookTwitter
Archdiocese of BostonTechnology

Our EyeFi/Mifi test: How did it go? 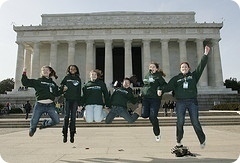 Last week,I wrote about an experiment in new media we were working on at the Archdicoese of Boston. My colleague, George Martell, a photojournalist, traveled to Washington, DC, with a group of Boston pilgrims for the 37th March for Life. He took along his usual panoply of gear, plus two new bits: an Eye-fi card for his camera that transmits photos to the Internet as they are taken and a MiFi, a portable wireless modem that connects to the Internet over mobile phone networks.

So how did it go? You can see for yourself at www.facebook.com/BostonCatholic or www.flickr.com/BostonCatholic. We got lots of photos of the three-day journey and, for the most part, they wereo nline and available for friends and family back home to follow along within a minute or two of the shutter closing.

I say, “for the most part” because we did have one glitch at the worst possible time. We only got a relative handful photos of the actual March for Life because the particular Eye-Fi card we’re using isn’t compatible with RAW format photos. (Tangent: RAW photos are the complete image files recorded by the camera’s sensor. Most point-and-shoot cameras do a lot of image-processing and compressing to make your photos look nice and make them small as they go, but serious photographers like RAW files because it lets them do all the manipulating and processing after the fact. The trade-off is that the files can be huge; an a professional SLR, they can be 25MB each or more.)

Unfortunately, during the Prayer Vigil for Life at the Basilica of the National Shrine of the Immaculate Conception the night before the March, George accidentally switched the camera to RAW mode while adjusting his white balance. The next day, he spent most of the March trying to figure out why the camera wasn’t transmitting his photos. By the time he realized his error, there wasn’t a lot of March left for him to photograph.

But no matter. We got lots of great photos of the pilgrims throughout the three-day trip and the many, many people who followed along were very happy with the results. Rest assured, we’re hoping to do a lot more of this type of thing and since we learn by doing, it will only get better.

(Photo credit: George Martell/The Catholic Foundation) May not be reproduced without permission. All rights reserved.