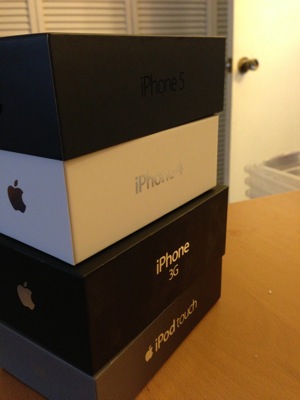 I purchased a new iPhone 5 last month[1]. I don’t want to do a full review–there are plenty of more qualified people who have done those already–but I wanted to touch on a few highlights and some things have struck me as I use it.

Much has been written and said about how this is not a revolutionary upgrade over the iPhone 4S. I think they’re right, but they’re also wrong in what that means. They acknowledge that the iPhone 5 is thinner, lighter, and taller with a bigger screen, but that there’s not much else new. But where I think the critics are wrong is in the comparison to last year’s model, the iPhone 4S. Unless you happen to make your living writing about technology–that is, if you’re not a normal consumer–you don’t upgrade your phone every year. Instead you don’t upgrade until your carrier gives you the okay, which is every two years. Thus the proper comparison is to the iPhone 4 and from that phone this is a big upgrade: The processor is much faster and everything about the iPhone feels zippier; I finally get access to Siri; The camera is a huge improvement.

In fact, I would say that there hasn’t been a truly revolutionary year-to-year upgrade since the iPhone 3G brought 3G speed, a real camera, GPS, and everything else. (Some might argue the Retina display upgrade from the 3GS to the iPhone 4 was revolutionary.) Since then it’s been incremental and evolutionary from year to year with enough features for the typical upgrader to buy a new phone.

Even though I do think the iPhone 5 is a great upgrade, I still might not have upgraded this year, except the home button on my iPhone 4 had stopped working.[2] That’s not to say that I don’t love my new iPhone. Like I said, evolutionary. 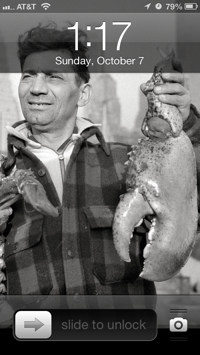 That said, it looks gorgeous. I opted to get the all-black version and it’s sharp. The aluminum back will be more durable than the glass, undoubtedly and the sharp, deep blacks of the Retina display blend seamlessly into the black bezel that surrounds it so that the display almost feels like it’s floating in space. The gorgeous contrast and brightness of the display almost demands a great black and white photo as your lock screen, like mine.[3]

From a more functional standpoint, I’m finding that I love Siri. Sure, it’s not perfect, but my understanding is that over time it will gain more and more functionality as Apple develops the server side[4]. Even now it’s very useful. Ironically, it’s restored a workflow I had four years ago that stopped working. I wrote in 2008 about how I used the now-defunct web service I Want Sandy and the now-defunct voice recognition service Jott to send stuff I wanted to remember to my task management app Omnifocus from my ancient Nokia dumb phone while on my interminable commute. Now, with Siri and the Omnifocus iPhone app (which work together), I’ve got that back and even better. I just tell Siri, “Remind me to…” or “Remember…” and it goes to my Omnifocus in-box.

I find Siri to be very useful in other ways as well. Launching apps with it can be faster than hunting among the several hundred apps in dozens of folders on multiple pages on my phone. Playing music can be good too, although sometimes Siri has difficulty understanding what I’m asking for. For instance, when I ask for “Matisyahu”, she[5] thinks I’m saying “modest Yahoo”. If I ask for his song “Miracle”, she plays Kenny G’s “Miracles”. If I ask by the iTunes partial album “Miracle-Single”, I get Darlene Zschech’s song “Miracle” on her iTunes partial album “Miracle-Single”. I have too many songs in iTunes that refer to miracles.

When introducing iOS 6, Apple made a big deal about Siri being better at sports, movies, and restaurants. Since Melanie and I almost never get to go to the type of restaurant at which we can make reservations, that part goes unused as does the movie theater bit. (We go to the movies about as often as we go to fancy restaurants, which is to say never.) But I regularly make us of her ability to tell me about the weather or to give me information about sports.[6] She’s also great at providing random information, such as the kind the kids ask for, like what time is it in Australia right now and is it daytime or nighttime there.

What else do I like about the iPhone 5? As I said before, the camera is a big improvement, especially in low light conditions. (There have been some complaints about purple hazing under some conditions, but my solution is simple: Don’t do that.)

The larger screen is nice, although I can’t say I felt cramped on the old screen. Having a fifth row of icons on the main screen does mean I don’t have to dig quite so deep for more of my apps.

Other improvements are due to the iOS 6 upgrade available to many iPhones and iPads so I won’t include those as iPhone 5 improvements.

Like I said it’s not revolutionary. Instead, I would say that iPhone 5 is about polishing the jewel, not mining the raw diamond and cutting its facets. I love this phone. It’s the best iPhone I’ve ever had and part of the reason for that is that it’s not a huge change from what came before. How much more perfect can perfect get in one year increments?