Entitled to a good story or just the ending?
1 comment
Share:FacebookTwitter
BooksTV and Movies

Entitled to a good story or just the ending? 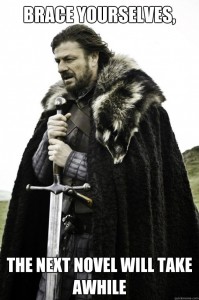 Apparently there was this funny moment at the San Diego Comic-Con this past week involving the author George R.R. Martin, author of “Song of Ice and Fire”, the novels on which the HBO series “Game of Thrones” is based. He took part in a stunt in which he crashed a concert by the YouTube duo Paul & Storm, while they were singing their song “Write Like the Wind (George R.R. Martin)”, in which they comedically encourage him to write his epic series of novels faster than he has, at one point referring him to as a “great bearded glacier” and pointing out that Shakespeare wrote 35 plays in the time’s he written his (still incomplete) saga.

The video of the song:

The video of the Comic-Con stunt:

You’ll notice that the author Neil Gaiman comes out and forces an apology from the performers in the form of, if you’ll excuse the language, “George R.R. Martin is not our bitch.”

That particular phrase is Gaiman’s involvement in all this. It’s from a 2009 response to a Martin fan complaining about Martin’s glacial pace in producing new novels, where Gaiman pointed out that “George R.R. Martin is not your bitch. … People are not machines. Writers and artists aren’t machines.” He went on to explain how the writing process works and that a reader buying a book does not create a contract, explicit or implied, with the author in any way, shape, or form.

It seems to me that there are a lot of entitled attitudes these days among many kinds of fans, whether they be fans of novels, TV shows, movies, or even technology and gadgets. Many people act as if they have a right to have their every demand, every whim, every “need” answered. I bought your music on iTunes and so you, the artist, should feel compelled to answer my Tweet or sign my autograph. You, the TV actor, writer, or producer must answer all the questions that have arisen in the course of your show before the end of the season, or God forbid, the series.

I’m beginning to realize that there are many people out there, maybe even most, who don’t care about seeing or reading a good story, if they could just find out whodunnit or whatever the Big Reveal at the end is right now. There are plenty of websites out there dedicated to revealing the “spoilers” to movies and TV shows. When I once complained on Facebook about people revealing spoilers of shows that aired that evening, not taking into account the many people who watch stuff on DVR the next night, I was taken to the woodshed for being so presumptuous. I want to discuss the death of that particular character NOW.

LOST in the story

I think this is why Melanie and I loved LOST so much, even the ending, and why so many didn’t. For one thing, we never expected to get the answer to every question that had been raised, every loophole that had been opened, every thread left dangling. We’d been listening to the official podcast with the showrunners, Damon Lindelof and Carlton Cuse, all along and we knew that it wasn’t going to happen.

But even if we’d not listened, we’d still have been okay with the end, because we both agree that our interest in LOST was never about the answers to the big questions. Sure, it would be nice to get it wrapped up in a nice bow, but that was never the point.

As the old saying goes, it’s the journey, not the destination, that really matters. We want to know the stories of the characters and see them grow and experience the unfolding. The telling of the story, in all its rich tapestry and artful turn of phrase and enchanting beats and colorful descriptions and clever dialogue, is what matters. But a lot of people just want to get to the end. What’s the Smoke Monster? Does Bilbo kill the dragon? Who ends up as king on the throne of swords? Is Bruce Willis really a ghost in Sixth Sense?

And when the story doesn’t deliver the neat, packaged answers or when the author takes his time crafting the story he wants to tell, the readers and viewers get angry and disappointed.

We’re a society that doesn’t want to wait for anything anymore. Fast food isn’t fast enough. Never mind the 30-second commercials during our TV shows; the 15-second pre-roll ad on the YouTube video drives us crazy. There’s an acronym you see online all the time now: TL;DR. It means “Too Long; Didn’t Read.” You see that in response to YouTube comments, for crying out loud!

So people like poor Gareth, the Martin fan, obsessively hits refresh on his web browser, reloading his favorite author’s blog over and over, demanding to know why he’s out tending his garden or visiting friends, when he should be home pounding out another novel, dammit, and never mind crafting art, just tell me what I want to know right now so I can tell the author that the series dropped off in quality, but at least he finally wrapped up all the loose threads.

Are we heading to a future of 150-page pulp fiction novels churned out by a factory of ghost writers on a monthly schedule so no one ever need wait for their fix? Is the soap opera to be the model of storytelling in the future, where we’re spoon fed a little bit more of the answers to the questions that crop up, as implausible as they all are, each day, just enough to keep us coming back no matter how banal and stupid the stories actually are?

And is anyone still reading this long tome or did everyone sign off after the videos above with a reflexive TL;DR?