[lead dropcap=”yes”]Camping has been a part of my life for as long as I can remember. From before I can remember, my parents took us RV camping: in a VW microbus and then later in a borrowed Winnebago. Eventually we got a trailer camper. As I got older, I became a Boy Scout and camped with them and into my adulthood, camped with friends and family and now have introduced camping to my own family.[/lead] 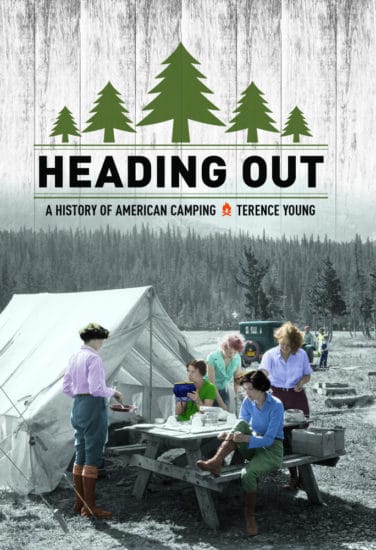 So, when I heard the interview with Terence Young, author of “Heading Out: A History of American Camping,” on the Art of Manliness podcast, I was intrigued to find out more about this activity that seems such a part of my life and of the American landscape. Young begins by noting that recreational camping, as such, is a somewhat uniquely American activity that has it origins in the post-Civil War 19th century due to several streams that coincided then.

First, there was the Romantic movement that in America idealized nature and natural landscapes, creating a spiritual connection to the land that was unlike what existed before. Thoreau and Emerson are prime examples of this in writing, along with Thomas Cole and the Hudson River school in painting. You also had the rapid urbanization of America, as what had once been a predominantly rural and agricultural society began streaming into the mechanized and industrialized cities where there was more wealth and opportunity, but also less privacy, beauty, and nature. There was the closing of the American frontier along with the Centennial of American Independence that recalled the once rugged character of the pioneers and frontiersmen that many people thought was being lost in modern urban hustle and bustle. Finally, there was a critical mass of Civil War veterans who all experience with roughing it in the outdoors who could act as guides and who enjoyed the outdoors themselves.

There was also a religious element to the rise of camping as well. For centuries, Catholics in Europe had headed out in spiritual pilgrimages, especially the Camino Santiago de Compestela, in which they walked hundreds of miles in a journey to bring them closer to God. Protestants, meanwhile, did not engage in such a Catholic activity, laced as it was with popish “saint-worship”. But there was still a felt need to make a spiritual connection by getting away from every day life. This coincided with Romanticism to create a new kind of spiritual pilgrimage, a communing with God with took place in nature, away from cities.

Into this mix walked a Boston Protestant minister by the name of William Henry Harrison Murray, who published a book in 1869, Adventures in the Wilderness, that described camping in the Adirondack Mountains of New York state in such colorful and accessible terms that it was a huge hit. If it were today, it would by a NY Times bestseller and an Oprah book pick. And because it also described the hows and whys—where to go, what to bring, who to hire as a guide—it ignited a massive rush of people into the woods that continued for years.

As National Parks were set aside those also became destinations, as people traveled West by train from the Atlantic states to spend weeks in Yosemite and other places they read about in magazines and newspapers and books.

That was followed some decades later by the next big leap in camping provided by the automobile. Once the car could transport people to all manner of destinations, auto camping became a big push. You could load a full set of gear onto the car or even attach a trailer and set off in relative comfort. No riding a train and then a horse-drawn wagon provided by a guide. Instead, you traveled on your own, by your own itinerary. By the late 1930s, camping had become a huge national pastime, all impelled by the desire to get out of the urban rat race and into the tranquility and authenticity of nature for a spiritual reconnection with the true American spirit, at least that which people thought was true.

The Stories that Illustrate the History of Camping

Young covers these vast sweeps of the history of camping by first sketching the broad outlines of trends and activities and then zeroing in on specific personalities. One chapter is spent on the experience of minorities with regard to camping, and his focus becomes the National Parks in Virginia in the 1930s as some within the Department of the Interior try to remove segregation from the parks—since the federal government was officially anti-segregationist at the time—while others opposed that effort because they thought that local laws should hold sway.

Another chapter discusses the creation of the auto campground. At first, cars just drove off of roads and set up camp wherever they wanted, even if they had to cross a delicate meadow ecosystem to get there. It was a bigger problem in the Sequoia National Park because people were driving right up next to the biggest, most famous trees in the Giant Forest and camping on their root systems, even attaching their trees and tarps to the trees themselves! That led to the tasking of E.P. Meinecke to develop a standardized layout of the auto campground, the same one we know today: One-way roads throughout, green space separating each site, a designated spot to park the car, the provision of a picnic table and fire ring. Even the use of rocks as natural barriers instead of using guardrails or fences and unassuming signage that blends in with the natural landscape. Everything had a particular purpose to preserve the location while providing the naturalistic, non-urban environment people wanted.

Young also covers RV camping and tells the story of Wally Byam, the founder of the Airstream camper company and its most iconic camper, and how his charitable foundation in the 1960s and 1970s loaned campers to families of diplomatic service officers between assignments and to foreign diplomats stationed in the US to let them get to know the “real” USA outside of the big cities. (Might still be useful today.) We also read about the rise of backpacking through the lens of the West Coast’s major through-hiking trail, the Pacific Crest Trail that goes from Mexico to Canada, and how two men were instrumental in its formation and then surveying it to mark the path.

The Decline of Camping

The book ends with a look at the rise and decline of American camping as a popular activity. Young notes that camping is still the fourth most popular outdoor activity by participation, after running/jogging, biking, and fishing, with 14 percent of Americans taking part. He identifies several reasons for its rising popularity through the century-plus since the Murray book was published. The need to escape urbanization was previously mentioned. Young also points to what he calls the “McDonaldization” of camping through increased comfort provided specialized gear, the use of automobiles and recreational vehicles (RVs), standardized campgrounds with enough amenities to qualify as resorts and the like. But he notes that these are part of the reason for camping’s decline as well.

Campers were pilgrims in search of transformation, so they had to move “out” of their customary world. Everyday life for campers was lived in modernizing cities, which despite the many benefits, they found unsatisfying and distressing. Their romantic antimodern response was not to flee cities permanently but to temporarily travel outside their urban lives and to engage in historically, socially, and even family-saturated activities. By “roughing it,” campers affirmed their senses of identity and belonging even as they found relief and restoration. Over time, however, camping tended to become less challenging, because, like much in the modern world, it was subject to McDonaldization. Manifestations included the proliferation of such specialized gear as ultralight tents, insulated coolers, and aluminum trailers, as well as the standardization of automobile campgrounds along lines first proposed by E. P. Meinecke.

It’s undeniable that by several metrics, it is in decline. The number of overnight visitors at National Park Service campgrounds peaked in 1981, although if you also count all the visitors who also camped outside the park while visiting, then the peak was 1979. But what about all the non-NPS camping? According to a national survey on recreation that’s been taken annually since 1960, participation in camping grew rapidly each year until 1983, after which it grew at a slower pace. Then in 2001, participation peaked and has continued downward ever since.

The question is why. As we saw in the quote above, Young posits that McDonaldization has made “roughing it” too easy, removing for many the reason for going out, a kind of self-challenge. That might be true for some, but I have a hard time believing that loss wouldn’t be made up by people who are attracted to a lowering of the bar. Certainly, we can note that Americans are more sedentary than we used to be, glued to our computers, phones, video game systems, and streaming TVs. However, there might be another reason that’s less disheartening: “fewer Americans may be camping because America’s cities changed.”

When camping began, America was rapidly urbanizing and industrializing. The environmental differences between cities, towns, farms, and wildlands were increasing, and these different places were increasingly discrete and isolated from one another. Cities, in particular, included little that was green and growing. In recent years, however, the distinctions between these places began to fade as the qualities of one were incorporated into the other.

As urban, suburban, rural, and wild places became less distinct and the cities became more natural, campers, especially those satisfied with a relatively modernized experience, decreasingly felt a need to make a pilgrimage to nature “out there.”

In other words, according to his hypothesis, cities became less stultifying, less of a place to escape, as they added green spaces and parks and became more livable. Frankly, I don’t know if I buy that. The oldest American cities still tend to be full of traffic and noise and hubbub. Newer cities tend to be sprawling urban jungles that go on and on, full of subdivisions and strip malls.

As most things, I think there isn’t one reason but many. I tend to think that a lack of spirituality rooted in a solid religious doctrine has left some people overly worshipping nature and others unaware of our duty to be stewards of it. They have lost our connection to the wild places and nature. I’m not one of those who thinks that a forest is a substitute for a church or that God is a pantheistic entity all around us, but I do think that all of Creation sings His praises and that He created everything, right down to the smallest, pretty flowers out of His own joy and out of love for us.

I go camping to connect with Creation. I go because the places where you camp satisfy a need for beauty. I camp because it requires a bit of self-reliance and work. I camp because I want to pass these things on to my children.

Now I need to start planning our next camping vacation.