This reminds me of some Protestants whose dogmas are built on literal interpretations of the Bible, the “plain words” on the page they read. They accuse Catholics of complicating things, of offering complex interpretations that serve only to prop up their own dogmas. But Catholics respond that what looks like plain words on a page is a complex melange of human words, Divine inspiration, centuries of transcription, and ambiguous translation that requires an divinely appointed authority to interpret and match with an oral Tradition that is very deep and built on centuries of Christian belief, thought, expression, and lived experience and, of course, Divine inspiration.

I’m not saying that every word from the mouth of the Holy Father is Holy Writ, but I am saying that Pope Francis’ plain-speaking style can deceive one into taking the words at their common face value, when if you look with a keener and more receptive eye, you find much more depth and complexity that stands right in line with what the Church has believed and held all along. And perhaps it’s not Pope Francis who stands on shaky theological ground, but those who insist they know better. (Not to mention that what you see as Pope Francis’ words are almost always translations of idioms and other conversational speech from another language by a translator who makes his own judgments on what the Pope means.)

I understand that for many people the past 50 years has been one battle after another to hold on to a patrimony that has been battered and beaten. I’m one of those people. But this experience can result in a mindset of suspicion and can even end up in a way that asks other to prove themselves not enemies first rather than assumes they are friends first. The Pope–any pope–deserves better than that. 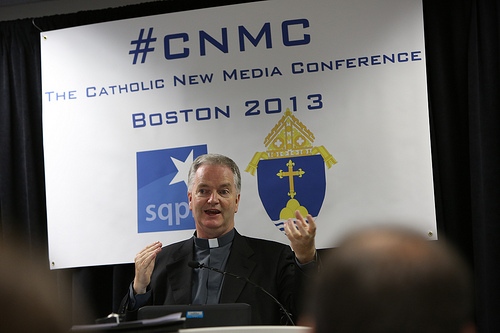 Catholic New Media Conference in Boston is a Hit