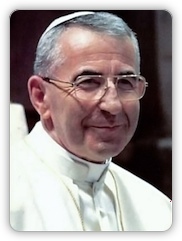 This coming Tuesday, August 26, will mark the 30th anniversary of the election of Pope John Paul I, who brief reign lasted only one month before his untimely death. Yet for all the brevity of his papacy, the controversy surrounding his death has lived on in the intervening decades. Conspiracy theorists have claimed that the pope either murdered or even committed suicide, all of which is nonsense. Nevertheless, that has not prevented hucksters from advancing their claims. The most prominent book on the subject is by David Yallop, called In God’s Name: An Investigation into the Murder of Pope John Paul I, first published in 1984 and released in a new edition in 2007. The infamous John Cornwall, author of the execrable Hitler’s Pope, has also weighed in with his tome.

Meanwhile, Lori Pieper, who blogs at “Lori’s Pilgrimage”, has been investigating John Paul I’s death for almost as long, even writing an as-yet unpublished manuscript. So now she is publishing her refutations of the conspiracy theories on her blog in time for the anniversary. The first part is online at Was Pope John Paul I Murdered? (Part I)

Many of the people who were close to Pope John Paul I have always been reluctant to talk about the controversy surrounding his death. This is not because they want to conceal anything, but rather because they are weary of being questioned on the subject. They wonder why there is so much interest in the theory that the Pope was murdered and so little in his life. They feel betrayed by those who have distorted the facts they have provided in order to write scandalous books, and angry because those who read these books seem to be more interested in sensationalism than they are in the truth. When I spoke with the Pope’s brother and sister-in-law and his secretaries, Father Lorenzi and Father Senigaglia, about his death back in 1985, they told me that they were afraid that attempting to refute these lies would only add to the furor, and that no one cared about the truth anyway.

It’s time to reclaim the truth about Pope John Paul I, né Albano Luciano, Servant of God who cause for beatification is ongoing. The life of holiness of the Pope should be what we remember, not this other silliness.

Photo is in the public domain. Via Wikimedia.