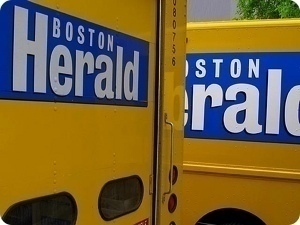 Well, some time ago the Boston Herald decided it wasn’t going to take this lying down. Every time there’s a crime story with any kind of hook to Craigslist, the Herald plays it up. If someone sells something online and they get robbed by the buyer, the headline will scream, “Craigslist!” If police clean out a nest of prostitutes using a local hotel to meet johns, the Herald headline will note that the trysts were arranged through Craigslist.

Of course, before the ‘List was a gleam in Craig Newmark’s eye, criminals were setting up dupes with fake offers to buy through newspaper classified and ladies of the evening were peddling themselves through ads in “alternative” newspapers and magazines, so this isn’t a problem unique to Craigslist. But that doesn’t matter to the Herald, which is fighting tooth and nail for its very survival. It doesn’t mind getting into the gutter with its rival, unlike the well-coiffed and oh-so-proper other newspaper in town, the Globe.

Thus it didn’t surprise me this morning to see the front page of today’s Herald blasting in huge type: “Cops hunt Craigslist killer”. The “Craigslist killer.” Oh, you know that the paper’s editors are hoping that the sobriquet sticks. And they offer not one, but four articles in the paper today about the heinous crime, including one profiling “escorts” advertising on Craigslist who are now in fear for their lives.

This is indeed a tragic crime, but apparently the Herald isn’t above making sure its mortal enemy gets shackled to the criminal who committed it.

N.B. Don’t get me wrong. I much prefer the Herald to its pretentious rival on Morrissey Boulevard. It’s the one newspaper I subscribe to and I find its editorial focus much more compatible with my own outlook. I’m just pointing out that the Herald doesn’t have pure motives here.