What car should a growing family buy?
3 comments
Share:FacebookTwitter
Driving and commutingMarriage, Family and ParenthoodPersonal

What car should a growing family buy? 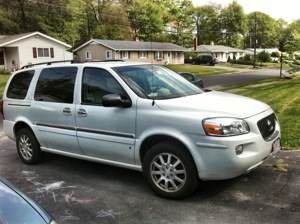 It’s time for our family to start thinking about a new vehicle to transport us around. Our lease is up in February and we want to plan for the future. Unfortunately, the options for large and growing families are limited.

For the past four years, Melanie and I have been driving a 2006 Buick Terraza, or as I like to call it “the minivan no one has heard of”. It’s a decent enough vehicle, with two sliding doors and three rows of seats. It even has an in-car DVD/TV system, although we’ve used it just a couple of times total. (Our kids don’t watch much in the way of movies or videos.) On the downside, the rear seats don’t flat, like those in newer, more popular minivans and so in order to haul anything big, you have to take the massive and awkward contraptions out and store them somewhere. (And since we don’t have a garage, storage options are limited.) And when the seats are not folded flat, the view to the rear through the headrests on those seats is somewhat limited.

The Terraza seats six, at least when there are four kids in car sears. Two adults in front, two car seats in the middle bucket seats, and two in the rear bench. In Massachusetts, child must ride in car seats until they are five, and then they can use a booster until they are 4’9”. Bella just turned five so we’ve picked up a booster seat, which should allow us to get a slim adult, like my sister-in-law, in the back between Bella and Sophia, getting us up to seven and just barely allowing everyone in our house to travel places in one car.

We lease the Terraza from a company I’ve been doing business with for about 14 years, which leases out one- or two-year-old vehicles, mainly from rental fleets. I got my Dodge Stratus from them way back in 1998 and then upgraded to the Dodge Intrepid. About 18 months after we were married and when Bells was six months it was time to bow to the inevitable and move up to the minivan. The way this company works, when you get into the last year of your lease, which I’ve generally taken for five years at a time, they offer to let you get a new lease early. They keep a loyal customer and I get a newer car. So now we’ve just received the letter from them and we’re starting to think of a new vehicle.

So what kind of car will we want to have for the next four or five years? We have had four children in the past five years. We hope to … slow that pace down from here, but we are open to God sending us more children. Melanie conceivably (pun intended) has another 10 years of possible child-bearing. (To reiterate, we are not expecting another child at this time.) Meanwhile, in four years Isabella, Sophia, and Benedict will have moved up to booster seats, but will not yet be old enough to go without. Anthony will be just about to move to a booster. Yet there could one, two, or even three more kids. (Eep!)

So the big questions is: What do we get?

I asked this over on Facebook and got a variety of answers, including 12-passenger van, 15-passenger van, Chevy Suburban, Honda Odyssey, GMC Acadia, and even a school bus (though that was tongue-in-cheek.)

I think I will eliminate the Odyssey and Acadia right off the bat, although they are both nice looking vehicles. The Odyssey’s main seating advantage over the Terraza is that the middle seats are a bench, not buckets so you get on extra there. And the Acadia has no seating advantage over the Terraza. Otherwise, both are very nice vehicles with lots of interesting options, although the Odyssey is so popular it will be hard to find used and the Acadia is just pretty expensive. 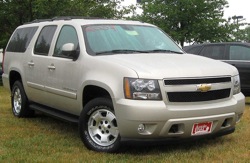 I’ve seen a lot of families go for the large-capacity vans, especially since there are so many in the used-car market and they just have capacity galore. I’ve been told by some who’ve owned them that I should go for the 15-passenger variant instead of the 12 because the 12’s back seat butts right up against the rear door, leaving almost no cargo room, unless I take out the rear bench (cf. no garage, no storage, above). Some have warned that these are difficult to drive in the snow, get terrible gas mileage, and big and bulky to drive and park in general. Melanie will be driving it most of the time so difficulty, especially in snow, is a concern. But my sister just got a full-size van so we’ll ask her how she feels about it.

And then there’s the Suburban. My brother owns one of these to carry his family with six kids and has taken many long road trips in it. With front and middle bench seats, it can also seat nine, although the ninth passenger sitting in the middle between the driver and the right-side passenger has to be over 12 years old. Still, even without that seat, you can get a good six in the back, which is two more than we can do now.

So we’re still thinking about it. What should we get? What do you big families drive and how many of your kids are in car seats still?