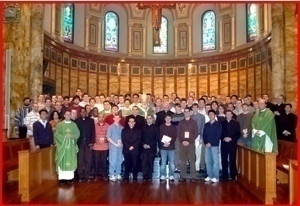 In his blog post this past Friday, Cardinal Sean O’Malley mentioned that the Archdiocese of Boston’s St. John’s Seminary hosted a vocation discernment retreat and over 60 men in their 20s and 30s participated! Wow, that’s a lot. Naturally not all are called or will answer the call, but that’s an encouraging sign.

After celebrating Mass for the retreat participants, I suggested that we take this picture for the blog. However, I introduced the idea realizing that there may be some who might not want to be in the photo. I told them that everyone except those who were in the witness protection program or who had not told their mothers or their girlfriends that they were coming to a vocation retreat, could come forward and have their picture taken. I assured them that we were only going to put it on the blog and then we were going to destroy the negatives!