The trouble with the Boston Globe
3 comments
Share:FacebookTwitter
Mass. PoliticsMediaPolitics

The trouble with the Boston Globe 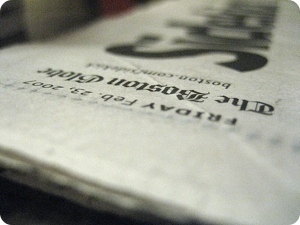 Speaking of Boston newspapers, the blog The Liberty Papers writes about the recent and ongoing troubles of the Boston Globe and opines that it’s not just another victim of the general decline of the newspaper industry and the economy, specifically, advertising revenues. No, the author of the piece, says the Globe’s problems go much deeper than that.

In fact, he says, the newspaper’s advertising revenues have been declining much faster than other newspapers in the region, including it’s sister publication with The New York Times Co., the Worcester Telegram. And the same thing goes with a decline in the subscriber base.

In 2008 the Globe’s average weekday circulation fell to 350,605, down from 382,503, or 8.3 percent [since 1992 when it was purchased by the NYT]. Sunday circulation fell 6.5 percent to 525,959. The competing newspapers for the Boston Area, the Boston Herald, and the Patriot Ledger (and to a lesser extent, a smaller local paper, “The Enterprise”), are doing alright… as much as any newspaper is anyway. Both are down about 4%, HALF the decline of the Globe; and counter to the general trend in the newspaper business (actually in most any business) of the second and third papers in a market (which they are) losing more circulation in a downturn than the market leader.

Then the question becomes, Why is the Globe doing so much worse? His conclusion may surprise you. In fact, he says, the Boston Herald and Patriot Ledger remains somewhat conservative newspapers (or as he describes them, “moderate center left” and “moderate center right”, which is pretty conservative in Massachusetts), even as the Globe has gone more and more hard left ever since being purchased by The New York Times Co. Well, that matches the liberal population in Massachusetts, right? Not quite, he says.

Massachusetts has a reputation as a very liberal state, and Boston a very liberal city; and to an extent that’s true. Certainly it is reflected in the states voting record, and much of it’s congressional contingent.

However, regarding Massachusetts as a liberal stronghold, fails to take into account the true nature of the states liberalism.

The vast majority of the Boston area is blue collar, and low level white collar, union, catholic, old line northeast democrats; with a significant minority of what we used to call Boston Brahmin democrats (rich, socially and politically conservative on a personal basis; but they support liberal politicians to seem “progressive”, to make sure “the right people” run things, and because democrats are easier to buy off).

It’s a very interesting perspective and probably not far off. I’ve found in one-on-one conversations with folks, especially older folks, that it’s not that they support very liberal social engineering and wealth re-distribution, but that they’re still stuck in the idea that the Democrats are the party of the average guy versus the fat-cat elite Republicans. But the fact is that you’re as likely to find liberal Republicans and liberal Democrats hobnobbing in the cities, while more conservative Democrats and Republicans find common ground outside the cities. This is why the liberal elites on Beacon Hill couldn’t possibly allow same-sex marriage to come to a general vote of the populace: Because they knew that they’d lose the vote before they had the chance to indoctrinate the populace sufficiently that two men or two women can be married and to think otherwise is bigoted. They needed time to let the Kennedys and their ilk indoctrinate the those one-time Reagan Democrats into the new reality.

Yet, perhaps the Globe outpaced the populace and went further left faster than the people could be brought along. Oh sure, the glitterati and the politicians that the Globe is supposed to cover have all come out of the woodwork to lament the possible loss of the newspaper. But the people have been voting with their pocketbooks for years, dropping their subscriptions to the newspaper with every bizarre anti-Bush screed or anti-Catholic editorial cartoon. Herald columnist Howie Carr has gleefully filled up not one but two recent columns full of the Globe’s follies, including some shoddy reporting in which the desire to advance a liberal cause resulted in retractions because they just didn’t get the story right. After a while, the people began to notice.

Will it be the end of the world if the Globe shutters its doors? Competition is always better for the consumer, so I’d prefer two healthy competitors in this market to one, even if the one I prefer was the winner. On the other hand, if the business can’t offer a product that the consumer wants, then let another take his place.