The Pope’s message for Latin America

Expanding on part of the message he gave to the bishops of Brazil on Friday, Pope Benedict told the bishops of Latin America yesterday that spreading the Gospel is not opposed to social action to improve the lives of the poor, but that social justice should spring from preaching Christ.

“Only from the Eucharist will the civilization of love spring forth which will transform Latin America and the Caribbean,” the Holy Father said, in his lengthy address to the opening session of the CELAM meeting. 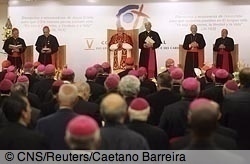 The Pope stressed that evangelization must be the top priority for Catholic leaders in Latin America, and the Church’s social action should flow from and serve that primary mission. The people of the region need a firm foundation in the Gospel, he said, in order to resist the temptations of Marxism, materialism, and a superficial or emotional approach to religious faith.”

That address to the opening session of the Latin American bishops’ conference, CELAM, followed the public Mass at the shrine of Our Lady of Aparecida in the morning. The text of the homily is available in English, but the official translation of the address to the bishops is not yet. It was quite lengthy. It will be here when it is put online. ( Update: The text is available at this link.)

As I said in my previous post, the Holy Father laid out his plan of action for Latin America, which he sees as vital to a renewal of the whole Church. He called it the “continent of hope.” He started by saying that Christianity was not a foreign ideology imposed upon the native cultures, but that Christianity is compatible with all cultures and that the people of the continent integrated it into their worldviews.

He then named some of the challenges facing the region:

Today, the Pope said, the Church faces the challenges brought by a global economy which “brings with it the risk of vast monopolies and of treating profit as the supreme value.” In Latin America, he added, there is another disquieting trend: “authoritarian forms of government and regimes wedded to certain ideologies that we thought had been superseded.” Here the Pope seemed clearly to be referring to leftist governments such as the Venezuelan regime of Hugo Chavez, who has clashed frequently with Church leaders there.

He then critiqued the materialism found in both Marxism and consumerism as being part of the problem.

The same materialism that characterizes Marxism, he said, can also be seen in secular societies based on consumerism, “where the distance between rich and poor is growing constantly, and giving rise to a worrying degradation of personal dignity through drugs, alcohol and deceptive illusions of happiness.”

“Both capitalism and Marxism promised to point out the path for the creation of just structures, and they declared that these, once established, would function by themselves; they declared that not only would they have no need of any prior individual morality, but that they would promote a communal morality,” the pope said. “And this ideological promise has been proved false. The facts have clearly demonstrated it.”

It was in this context that he rejected a politicization of the Church and Christianity a la liberation theology since by that very act the Church would be stripped of the very qualities which allow her to do so much good, namely her independence and moral authority.

He also warned against emotionalism and religious individualism in the practice of personal faith, perhaps in response to the cult of personality that is growing up around certain “pop-star” priests in Brazil and beyond, who use show biz techniques to excite the crowds and entertain them.

The antidote to these tendencies, the Pope concluded, is a spiritual renewal of the Catholic faith, and a new, vigorous evangelization of the continent.

John Allen says that Pope Benedict’s critique of capitalism should come as no surprise to anyone who is familiar with his work. (Certainly Pope John Paul II and others of his predecessors, such as Pope Leo XIII, cautioned us regarding the excesses of consumerism and capitalism.)

In 1988, then-Cardinal Joseph Ratzinger published a collection of essays under the title of Church, Ecumenism and Politics. In it, he argued that capitalism is little better than national socialism or communism, in that all three propose false idols (prosperity, the Volk, and the state, respectively). Ratzinger said that to build a humane civilization, the West must rediscover two elements of its past: its classical Greek heritage and its common Christian identity.

From the classical era, Ratzinger wrote, Europe should rediscover objective and eternal values that stand above politics, putting limits to power. Ratzinger used the Greek term eunomia to describe this concept of the good. In that sense, one could say that Ratzinger proposed a eunomic, rather than capitalist, model of Western culture.

Over the years, Ratzinger has been close to the Communio school within Catholic theology, which stresses the need for cultures to take their point of departure from the Christian gospel rather than secular ideologies. Its primary exponents have repeatedly criticized capitalism for promoting an ethos of individualism and “survival of the fittest” that is at odds with the communitarian thrust of Catholic social teaching.

Perhaps most relevant to our situation here in the US was his remarks about living in a society where God is intentionally excluded.

In that light, Benedict said, the greatest contribution the Catholic church can make is to credibly and passionately proclaim Christ. People who order their lives on Christ, he argued, naturally pursue the values of peace and justice.

“Where God is absent—God with the human face of Jesus Christ—these values fail to show themselves with their full force, and a consensus does not arise concerning them,” the pope said.

“I do not mean that non-believers cannot live a lofty and exemplary morality,” he said. “I am only saying that a society in which God is absent will not find the necessary consensus on moral values or the strength to live according to the model of these values, even when they are in conflict with private interests.”

That seems so very clearly evident here in Massachusetts. And so the Church needs to evangelize, first her own people then the wider culture. The oft-told lie, of course, is that the Church is being political, that this is a Vatican grab for power in foreign lands, which couldn’t be further from the truth. The Church doesn’t care about secular power, but about proclaiming the kingdom of God and saving souls. You can’t do that well, if society itself is working against you. Sometimes the Church’s efforts will align with the efforts of one political party, sometimes with another, but no one should ever be confused that Catholics must only belong to one or another party.

Other parts of his very-long 6,000-word talk dealt with many of the same issues I mentioned in my previous post.

This is a major address that will take some time to unpack, but which represent a fruitful exposition of Benedict’s vision for the Church.