The Pope’s message for Brazil

Update: Sorry. I got the addresses mixed up. This was the one to the Brazilian bishops. I’ll get to this address to CELAM yesterday now.

As expected Pope Benedict had some very specific words for the bishops of Latin America Brazil in his address to their meeting yesterday Friday. He got right to the heart of the very issues they are facing: proselytization by sects, poverty, liberation theology, oppressive political structures, the encroaching culture of death, and more than anything a need for evangelization of Catholics who have strayed.

I will excerpt his speech to the bishops extensively below, putting important passages in boldface and red:

This meeting is a great ecclesial event and part of the missionary outreach which Latin America needs to undertake, beginning here — on Brazilian soil. That is why I wished to speak first to you, the Bishops of Brazil, evoking these words, so rich in content, from the Letter to the Hebrews: Although he was Son, he learned obedience through what he suffered; and being made perfect he became the source of eternal salvation to all who obey him” (Hebrews 5:8-9).

Our ministry as Bishops thus impels us to discern God’s saving will and to devise a pastoral plan capable of training God’s People to recognize and embrace transcendent values, in fidelity to the Lord and to the Gospel. 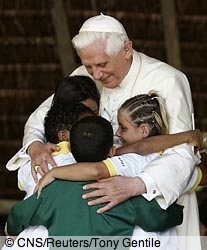 Certainly the present is a difficult time for the Church, and many of her children are experiencing difficulty. Society is experiencing moments of worrying disorientation. The sanctity of marriage and the family are attacked with impunity, as concessions are made to forms of pressure which have a harmful effect on legislative processes; crimes against life are justified in the name of individual freedom and rights; attacks are made on the dignity of the human person; the is increasingly widespread. Even more: when, within the Church herself, people start to question the value of the priestly commitment as a total entrustment to God through apostolic celibacy and as a total openness to the service of souls, and preference is given to ideological, political and even party issues, the structure of total consecration to God begins to lose its deepest meaning.

A particular problem which you face as Pastors is surely the issue of those Catholics who have abandoned the life of the Church. It seems clear that the principal cause of this problem is to be found in the lack of an evangelization completely centered on Christ and his Church. […] Consequently, there is a need to engage in apostolic activity as a true mission in the midst of the flock that is constituted by the Church in Brazil, and to promote on every level a methodical evangelization aimed at personal and communal fidelity to Christ. No effort should be spared in seeking out those Catholics who have fallen away and those who know little or nothing of Jesus Christ, by implementing a pastoral plan which welcomes them and helps them realize that the Church is a privileged place of encounter with God, and also through a continuing process of catechesis.

What is required, in a word, is a mission of evangelization capable of engaging all the vital energies present in this immense flock.

In this work of evangelization the ecclesial community should be clearly marked by pastoral initiatives, especially by sending missionaries, lay or religious, to homes on the outskirts of the cities and in the interior, to enter into dialogue with everyone in a spirit of understanding, sensitivity and charity. On the other hand, if the persons they encounter are living in poverty, it is necessary to help them, as the first Christian communities did, by practising solidarity and making them feel truly loved. The poor living in the outskirts of the cities or the countryside need to feel that the Church is close to them, providing for their most urgent needs, defending their rights and working together with them to build a society founded on justice and peace. The Gospel is addressed in a special way to the poor, and the Bishop, modelled on the Good Shepherd, must be particularly concerned with offering them the divine consolation of the faith, without overlooking their need for “material bread”. As I wished to stress in the Encyclical Deus Caritas Est, “the Church cannot neglect the service of charity any more than she can neglect the sacraments and the word” (No. 22).

The sacramental life, especially in the celebration of Confession and the Eucharist, here takes on a particular importance. As Pastors, it is your primary task to ensure that the faithful share in the eucharistic life and in the Sacrament of Reconciliation. You must be vigilant to ensure that the confession and absolution of sins is ordinarily individual, inasmuch as sin itself is something profoundly personal (cf. Post-Synodal Apostolic Exhortation “Reconciliatio et Paenitentia,” 31, III). Only physical or moral impossibility exempts the faithful from this form of confession, in which case reconciliation can be obtained by some other means (cf. Code of Canon Law, can. 960, Compendium of the Catechism of the Catholic Church, 311).

It is therefore clear that the catechist’s task is not simply to communicate faith-experiences; rather — under the guidance of the Pastor — it is to be an authentic herald of revealed truths.

Truth presupposes a clear understanding of Jesus’ message transmitted by means of an intelligible, inculturated language, which must nevertheless remain faithful to the Gospel’s intent.

[…] [T]here is need for a more correct implementation of the liturgical principles as indicated by the Second Vatican Council, as well as those contained in the Directory for the Pastoral Ministry of Bishops (cf. 145-151), so as to restore to the liturgy its sacred character. […]

Ecumenism — or the search for unity among Christians — has become in our time an increasingly urgent task for the Catholic Church, as is evident from the growth of intercultural exchange and the challenge of secularism. Consequently, given the rapidly growing number of new Christian denominations, and especially certain forms of often aggressive proselytism, the work of ecumenism has become more complex. […] The greatest area of common ground for collaboration should be the defence of fundamental moral values — transmitted by the biblical tradition — against the relativistic and consumerist cultural forces that seek to destroy them. […] Yet we must also be concerned with defending the faith of our people, confirming them in the joyful certitude that “unica Christi Ecclesia … subsistit in Ecclesia catholica, a successore Petri et Episcopis in eius communione gubernata” [“The one Church of Christ … subsists in the Catholic Church which is governed by the successor of Peter and by the Bishops in communion with him”] (“Lumen Gentium,” 8).

So his goals are clear. He sees the renewal of the Church in Latin America as a project of:

I think the Holy Father recognizes that the bulwark of the Church today is in the global South: Latin America and Africa. This is where those who are Catholic are most faithful and where so many of the world’s 1+ billion Catholics live. If we let the Church erode in those places, then the rest will not hold. Perhaps he sees that the re-evangelization of the world will come from a renewed faith and vigor in the Church of these two continents.

Incidentally, Thomas at AmericanPapist had excellent coverage all weekend of the Pope’s activities, including links to photos, his speeches, Catholic news reports and secular news reports. Here is his roundup of the whole trip and coverage of Sunday’s events.