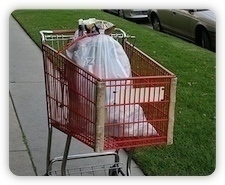 Our new hometown of Holbrook is one of the smallest municipalities in the Commonwealth of Massachusetts in both population and land area. It’s a classic New England small town, with a representative town meeting, which sounds like fun. Maybe I’ll run.

There are lots of small-town changes to get used to, but one there’s one I want to point out. Trash disposal has become an expensive problem for cities and towns, large and small. Most just bite the bullet, pay exorbitant fees, and spread the pain among all property owners, large and small, however much trash they actually produce. But Holbrook has come up with a solution that—while it seemed initially to be a pain—is actually quite fair.

In this town, your trash will only be picked up if it’s in a special blue trash bag, marked “Town of Holbrook” that you can can buy in local stores. The bags cost about $3 each, which sounds like a lot for a trash bag, but is quite economical for trash disposal.

What we have here is, in fact, a consumption tax. If you’re someone who doesn’t recycle and who creates lots of trash, then you pay for the waste you produce, whereas people like the elderly folks who live around me who throw away maybe half a bag per week pay only for their consumption. And if you don’t like the systems at all, you can pay a private contractor to take it all away for you, no special bags required.

Yes, there are inconveniences. Making sure that everything you throw out ends up in the blue bag can be tiresome. We’re still using regular kitchen trash bags for everyday use and then putting two of those in one of the big town bags. And I understand that just before we moved in the price of the bags doubled from $1.50 to $3. That could be a bit of sticker shock.

But the idea is itself a fairly conservative, small government way of doing things. You often find that on the local level, even in a very liberal area like eastern Massachusetts.