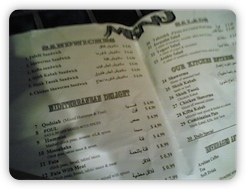 I just cleaned out our takeout menu file of all the old Salem/Beverly/Peabody places we frequented to make room for new Holbrook/Randolph/Abington menus, which was a sadder experience than I expected.

There are a lot of memories in those old restaurants. Asahi, in particular, was the sushi restaurant where I had lunch every Friday when I lived at the rectory and they were across the street. They were closed for a few years when their building was torn down, but when they re-opened it became a place for me and Melanie to go. In fact, the first meal after she gave birth to Isabella was takeout from Asahi, accompanied by well-wishes from the owner who came to know us on sight.

Then there was Cilantro, the high-end interior Mexican-style restaurant that was our first official date. (Melanie doesn’t recognize the unofficial first date as canonical.) Or Passage to India, site of many a memorable meal alone or with friends. Or The Landing in Marblehead, our last fine dining before Isabella was born.

Of course, the reality is that once Isabella and Sophia came along those days of frequent nights out faded fast. Not that I really regret the loss. I’d rather have mac-and-cheese with the three women in my life every night than any fancy restaurant without them. And as the girls get older, we’ll have those opportunities again. (Especially now that we have Melanie’s sister, Theresa, around the babysit occasionally.)

So, out with the old takeout and in with the new memories and experiences we’re sure to share, not just over a table, but in all areas of our new “South of Boston” life.

Incidentally, we discovered a new authentic Mexican place on the way home from Home Depot in Brockton today, called Burrito Wraps. It was very good, inexpensive, and even my Texas-born wife declared it to be worthy of regular visits. And that’s saying something!

(Double-incidentally, am I the only one who calls it “Home Despot” and imagines a maniacal dictator requiring new home improvements from everyone who comes in. Oh. Yeah. I guess I am.)