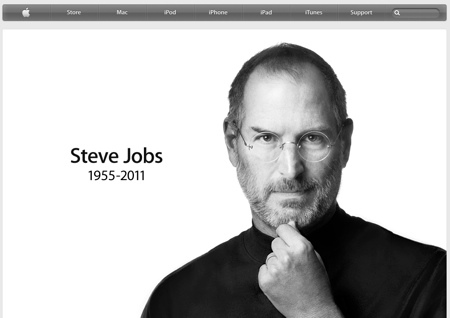 Here’s to the crazy ones. The misfits. The rebels. The troublemakers. The round pegs in the square holes. The ones who see things differently. They’re not fond of rules. And they have no respect for the status quo. You can quote them, disagree with them, glorify or vilify them. About the only thing you can’t do is ignore them. Because they change things. They push the human race forward. And while some may see them as the crazy ones, we see genius. Because the people who are crazy enough to think they can change the world, are the ones who do.

This statement from Apple’s “Think Different” campaign was originally applied to the great minds of the the 20th century, artists, scientists, entertainers, thinkers, and peacemakers. But it could also be said to apply to Steve Jobs.

I’m not going to write a hagiography of Jobs here or canonize him. I’m sure he was flawed and had his failings. But you can’t deny that he’s changed the world as we know it. In the past 30 years, he has completely changed four major industries: computers, telephones, music, and animated movies. And his influence has extended deeply into dozens of others.

Seven years ago, I wrote about the Apple computers that I’ve owned and used over the years and I’ve only gone deeper and deeper into the Apple ecosystem since then.

I don’t think it’s hyperbole to say that Steve Jobs has had more day-to-day influence on my life than anyone outside my family. It’s hard to say goodbye to him today. Something that Steve Jobs created through his incredible vision is never more than a couple of feet away from me at all times. And those amazing devices connect me to a world of information, entertainment, and more importantly, community that I could only imagine as science fiction just a few years ago. He will be sorely missed.

I would add, like I did at the CNMC, that Steve Jobs taught a lesson to Catholic communicators that we should stop selling toothpaste and instead sell clean teeth. Rather than trying to convince people of particular doctrines and dogmas, we need to show people how a relationship with Jesus Christ changes and improves your life.

I would say that some of the grief I feel today is for the man, Steve Jobs, and his family, but I didn’t really know him in those terms. To be honest, I think the greater emotion I feel is the uncertainty I feel for the future of the company he founded and the industries he’s shaped.

May Steve Jobs rest in peace.