Star Trek: Small Universe and No Chain of Command
Share:FacebookTwitter
TV and Movies

Star Trek: Small Universe and No Chain of Command 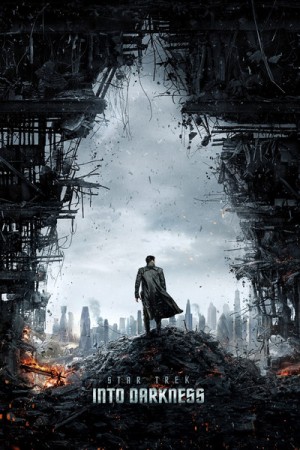 Allow me a moment of pure geeky nerdery. The other night I was finally able to watch Star Trek Into Darkness

. I was unable to catch it in theaters and have eagerly awaited the Blu-ray release.

Overall, I very much enjoyed it. (I will not-so-humbly point out that I called the villain and at least half the endgame scenario more than six months before the movie was in theaters.) It was an energetic and kinetic rock-’em, sock-’em thrill ride with an inventive take on key mythology from the original timeline.

But there are two things that bother me about this movie and the other Star Trek movies: (1) The universe is apparently the size of a small parking lot and/or starships can instantly transport from one place to another and (2) only those Starfleet crew under the age of 30 are competent apparently.

First, it bothers me how quickly the Enterprise travels from Earth to the Klingon homeworld. Like in 20 minutes of movie-universe time. It’s not even like we can pretend that there is real-world time compression, that time has passed in the movie that we don’t see because they come right out and tell us how long it takes. If that’s how close they are, then why have they just told us that there are only a handful of starships in range of Earth? Is Qonos just outside of Jupiter’s orbit? It’s just sloppy and annoying.

Second, experience is apparently meaningless when it comes to who does what on a starship. Based on the first movie’s timeline, Kirk should be a junior officer, not the captain of the Federation’s flagship. And then when Kirk needs to replace his Chief Engineer does he select the second-ranking engineer on board? Because, of course Scotty doesn’t run the department himself so there must be a whole bunch of officers of varying ranks, experience, and time in service. No, Kirk takes his very junior navigator, Ensign Chekov and makes him Chief Engineer. Is it any wonder, Chekov spends the rest of the movie running around, unable to repair the engines?

I get that Starfleet is not a military organization, but is dedicated to science and exploration. Nevertheless, it clearly has defense functions and is modeled on the hierarchical chain-of-command pattern that serves naval-type ships so well. If it’s not exactly the US Navy, Starfleet is at least like the US Coast Guard, which also has the same hierarchical organization. This ensures that both experience and leadership are found where they’re needed.

I respect J.J. Abrams and the writers and producers of Star Trek, but it’s not an excessive burden on their talents to expect not to have such obvious holes in logic and commonsense take us out of the story.

And that’s end of my geeky, nerdy rant.