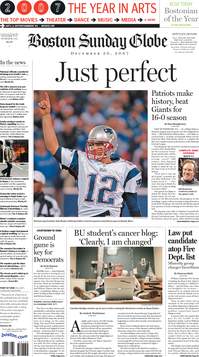 Contrary to popular myth, big games have never come easy for the Patriots. Each of their Super Bowl wins has been by just three points. Teams that others think the Pats should beat handily make a squeaker of it. It’s just the way it is for the heart-attack Patriots under Bill Belichick.

So it was no surprise to me that the Patriots did not crush the New York Giants by three touchdowns last night. Neither was I surprised that they defeated them in the end and that the game in the end was not as close as the score indicates.

What was very evident to me was that the Patriots, especially Tom Brady, were having a good time. Even after a promising drive bogged down and they had to punt, Brady could be seen on the sidelines looking loose, talking happily and animatedly with this teammates, perhaps saying something, “Dang, we should have had that. Here’s what we do next time…”

Let’s also not discount the importance of so-called “lucky breaks”. For any time to go undefeated, they need plenty of timely errors by the other teams, penalties that go their way, and officiating mistakes in their favor. Every team gets them occasionally and most bear the brunt of opponents getting them, too. This season the Patriots got more than their fair share of lucky breaks.

By the way, can we all agree that the announcing team of Bryant Gumbel and Chris Collinsworth were the best argument against watching games on the NFL Network. In a close second place was constant, not-so-subtle campaigning in their battle with the cable systems to be made part of basic subscription packages that almost made it impossible for me—and millions of other fans throughout the country—to see this historic game.

The big debate at the end of the game is whether the 16-0 record will be meaningless if the Patriots don’t win the Super Bowl. I think as far as comparisons with the 1972 Miami Dolphins and the title of the Greatest Team Evah, then yes, they will have to win it all. That’s never been in doubt, in my mind. Nevertheless, running off a string of 16 straight, regular season wins is an accomplishment that stands all alone, specially in this age of the salary cap and league-induced parity.

That’s not to put in doubt that the Patriots will win it all. While all the teams in the playoffs are formidable opponents, the Patriots have proven they can beat them all. The Colts, the Steelers, and the Chargers have all fallen victim to the Perfect Season. They could fall again. Yet I won’t be comfortable until they’re all in the rear-view mirror and I hope to be celebrating in February the first 19-0 Perfect Season and the undisputed era of the New England Patriots dynasty.

Without Dale, Does NASCAR Go On?

Jousting in the Olympics

How One Photo Made Modern Hockey

End of the Patriots’ season, end of an era?