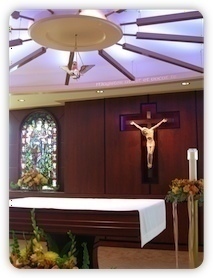 Today, Cardinal Sean O’Malley dedicated the new Bethany Chapel in the new Archdiocesan Pastoral Center in the Archdiocese of Boston. We moved our offices to the new APC back in July, but construction of the chapel took a little longer and it was finally finished in time to be dedicated today on the Feast of St. Therese of Lisieux.

It was a beautiful Mass with all the elaborate ceremonies of the dedication of a chapel, including the anointing of the altar, incensation of the chapel, lighting of the altar and chapel, depositing of the relics (don’t know yet which relics), and inauguration of the Eucharistic Pyx. (More on that in a bit.)

I love that the readings for the Mass of dedication includes the Gospel reading of Zaccheus the tax collector. It seems odd at first until you realize that the Church is reminding us that Christ agreed to enter into the home of the repentant sinner and dine with him, just as he enters into our house, our churches and chapels, to dine with us, sinners.

Regarding the name, Cardinal O’Malley said in his homily that it recalls Mary, Martha, and Lazarus and Martha’s invitation to Mary to go to the Lord: “The teacher is here, and He is calling you.” (John 11:28) He sees this an invitation to come to the chapel and to pray and contemplate what the Lord is calling us to. In fact, this verse is inscribed above the altar in Latin: “Magister adest et vocat te”.

Also above the altar is the Eucharistic Pyx, which replaces the traditional tabernacle. This was a particular choice by the Cardinal. It comes from Spain and is a type of tabernacle once used in the pre-medieval period of the Church, especially in the east. It is in the form of a dove, which symbolizes the Holy Spirit, and hangs directly above the altar. It is on a chain so that it can be pulled down to open the door in its chest to place in and remove the Eucharist. He said such pyxes are mentioned in the 6th century writings of St. Gregory of Tours.

Another feature of the chapel is that all the stained glass windows, including the enormous rose window, come from closed parishes around the archdiocese. The crucifix is the physical connection to the old chapel at the chancery in Brighton, brought over in a special ceremony when we moved.

Meanwhile, the Sister Disciples of the Divine Master are a religious order that has come to the APC to care for the chapel, to operate a small shop of devotionals and vestments next to it, to continue their communal work making vestments, and to pray in Eucharistic adoration every afternoon.

While it may not be the most traditional chapel in form, I think the folks at the archdiocese did a pretty good job of turning what was once a bland office space into a suitable location for worship and the celebration of the Mass. It will be nice to go there for Mass during the week. 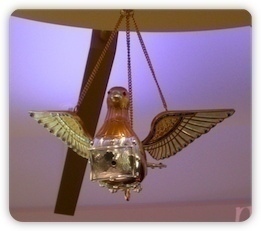