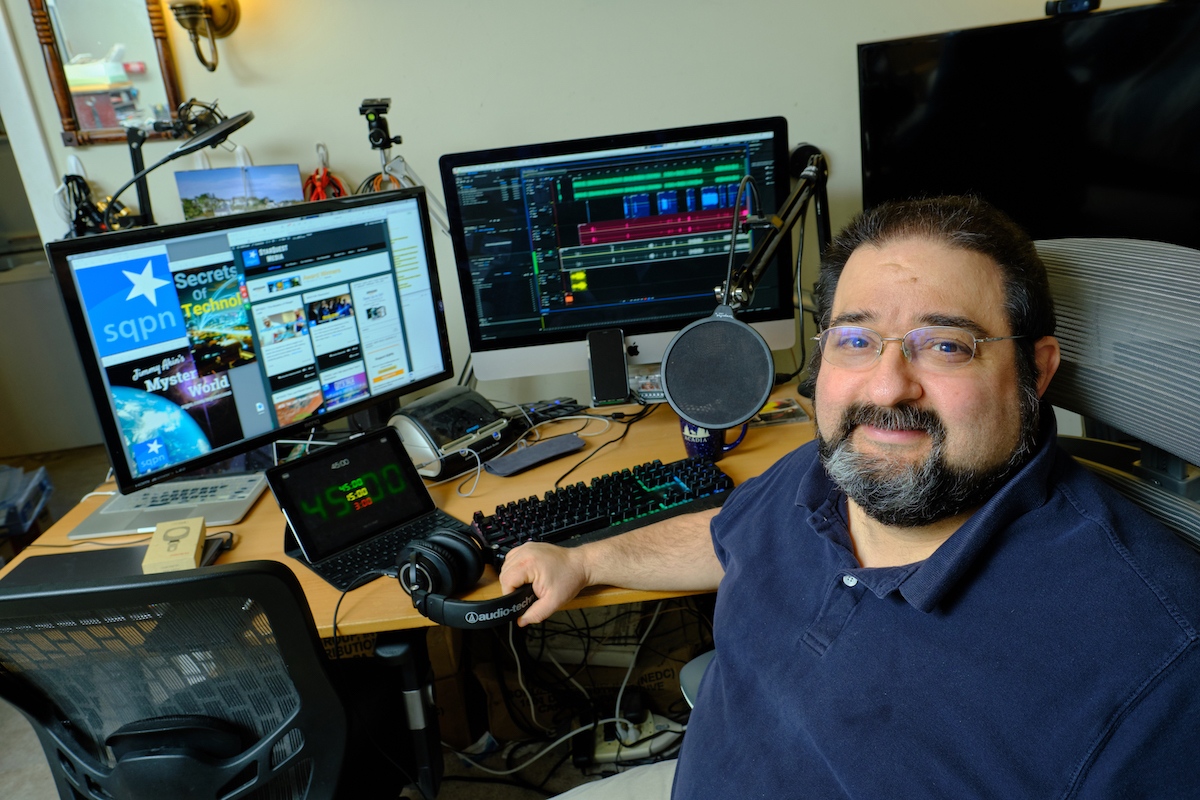 I’m sometimes asked about my podcasting workflow, how SQPN goes about recording, editing, distributing, and promoting our shows. Right now, for the most part, this is a one-man operation. However, we’re growing to the point where I’m going to need to start bringing on some help and handing off some of these elements to other people. So what follows is a series of posts that explain the multiple steps that take me from the beginning to the end of the process for each show we produce. The first step involves the hardware setup.

My office at home is where I do my podcasting. I have a big Ikea desk on which sits my computer and a second monitor and microphone. Actually “sit” isn’t technically true. Both the 27" iMac and the 27" secondary display are on separate swing arms that allow me to move and reposition them independently as needed. On a small rolling cart to my right sits my Mackie ProFX8 mixer. It’s a bit overkill for a single microphone setup, but I anticipate doing multiple microphone recordings in my office in the future and this will work well for that. The Mackie is connected to my Mac via USB.

My microphone, an Audio-Technica ATR2100, is connected via XLR to the mixer through a Cloudlifter CL-1 microphone pre-amplifier. The microphone hangs off of a Rode PSA1 boom arm and a shock mount along with a pop filter.

Update: I've replaced my ATR2100 with a Rode Procaster, which is the next step up in quality. I think it provides a better sound for my voice type and it's better at recording just my voice.

Hanging from an Elevation Lab AnchorPro headphone hook under my desk is my Audio-Technica ATH-M50x headphones which are directly connected to my iMac’s audio-out port.

For video I usually use the iMac’s built-in FaceTime camera, but if we’re doing a livestream, I have a Logitech C922 Pro webcam as well.

My primary keyboard is a Cooler Master MK750 full-size Cherry MX Brown keyboard. This is a very cool keyboard with great typing feel and key travel, but it’s too loud to use while podcasting. It’s clicky enough that the microphone picks it up if I have to do any typing during the show. So when I’m recording I switch to a Razer Blackwidow Lite with Razer Orange switches. This is also a mechanical switch keyboard, but with the addition of o-rings, it’s much quieter to type and thus doesn’t get into my recordings. I don’t use it all the time because it’s not a full-size keyboard (I love my number pad) and I don’t love the key travel as much.

Update: I have since switched to the awesome CODE Mechanical Keyboard, also with Cherry MX Brown key switches. The Cooler Master developed a weird tic where it would double-type some keys and that got annoying. The CODE is a pleasure to type on and it's not so loud that I can't use it during recordings (or I mute my mic when I do use it.)

For backup and storage, I have a Synology DS418 with 10TB in a RAID 1 configuration as well as a Synology DS216+II with 4TB in RAID 1, plus a few other backup drives directly attached to the iMac.

In the next post, I will discuss how I research and prepare for a show.