My Podcasting Workflow: Research and Preparation 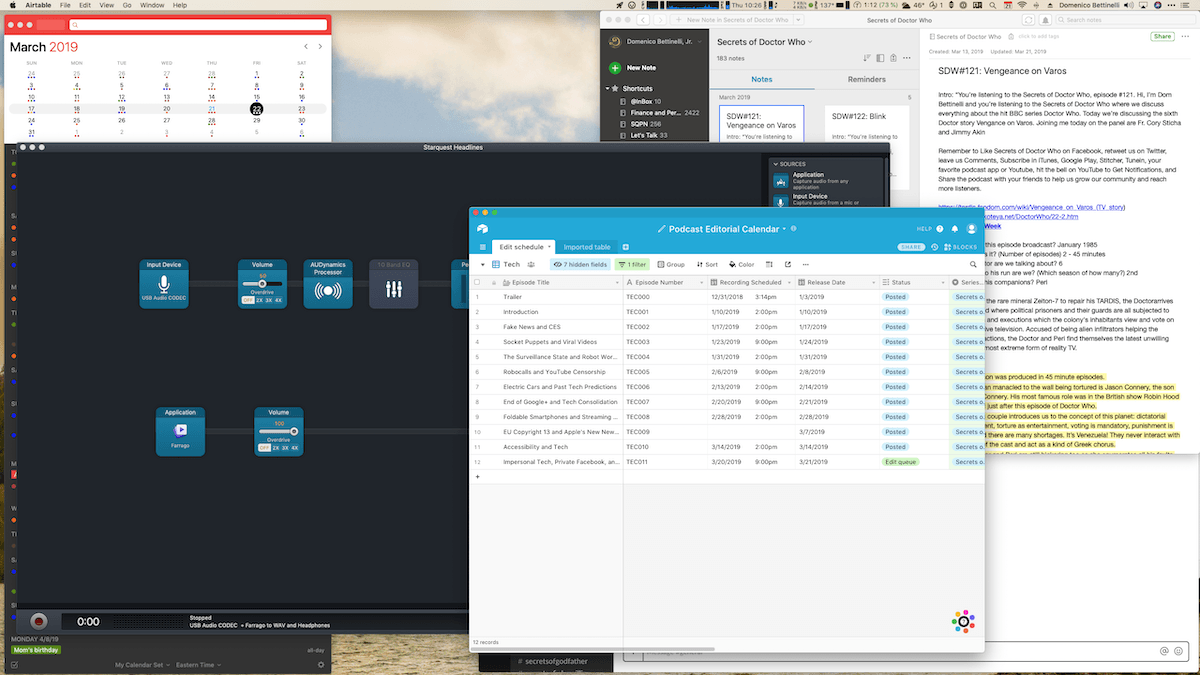 I’m sometimes asked about my podcasting workflow, how SQPN goes about recording, editing, distributing, and promoting our shows. This is the second in a series of posts that explain the multiple steps that take me from the beginning to the end of the process for each show we produce. The first post described my hardware setup.

Before I record a podcast, there’s a certain amount of work that needs to be done. I keep track of all our shows and the individual episodes and where they are in the process using the relational database tool AirTable. The database is broken down into a series of views either by show title or specific filters like “In the edit queue” or “in the release queue”.1

Each record has the episode title, episode number, the date and time that the recording is scheduled (if any), the release date of the show, current status (i.e. idea, scheduling guests, recording scheduled, edit queue, posting scheduled, posted), series title, assigned editor, host, guests/co-hosts, episode description, editorial notes, link to the episode on the SQPN site, and then specialized fields related to particular shows (e.g. which Doctor is it, the Doctor Who season, Doctor Who or Star Trek original air date; the Mysterious World category; the Star Trek series and season, etc.) There’s also a database of the podcast panelists and guests and their contact information as well as databases for tracking the picks of the week for The Secrets of Technology and Let’s Talk.2

I keep detailed notes for each episode of each show in Evernote. I have a notebook for each and separate notes for each episode, plus notes for listener feedback, ideas, and so on. If we’re doing a podcast about a particular TV show or movie, I’ll create the note before sitting down to watch and keep my running notes in there as well as any research I do online. Before recording I put the script for my intro and outro and anything else I want to say in the note.

For The Secrets of Technology, we have group show preparation in Google Docs. Every week I create a new file that the panel for that week can consult to see what we’re going to talk about or to which they can contribute ideas for the discussion. For Jimmy Akin’s Mysterious World, we work from Microsoft Word and Excel documents that Jimmy creates and posts in a shared Dropbox folder. In other words, we use whatever system is most comfortable and efficient for everyone involved in the show.

I keep track of every step in the process of production in Omnifocus. Every episode of each podcast gets its own project in Omnifocus and because the steps are virtually identical every time, I have created templates for creating them. Describing the templates in detail is beyond the scope of this post, but I may come back and write it up in another. But the templates are stored in the iOS app Drafts. I run a javascript that asks for the variables, usually show number and the show date, then it calculates the deadline for each step based on that show date variable and then inserts the project into Omnifocus. Using a template ensures that I don’t miss any steps on each show.

Of course, communication with the panelists on the shows is important and for that I rely mainly on Slack. (See my previous description of it here.) We have channels in Slack dedicated to each show (e.g. Secrets of Movies and TV) and then groups for particular episodes (e.g. Secrets of Jurassic Park episode of Secrets of Movies and TV) where just the people in that episode can discuss and plan. There are also channels for other functions as well like finances, the board of directors, and so on.

In the next post, I will discuss how I actually record a show.