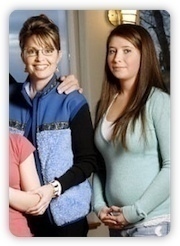 While it’s always a strong contest every year one of the biggest contenders for “most slanted coverage of a person in the news” would go to the MSM’s coverage of Sarah Palin. And the end of her vice-presidential candidacy didn’t stop it either. This week, the governor received the happy news of the birth of her grandson. So how did the Associated Press cover this happy news? With a constantly evolving wire story that kept re-phrasing a non-objective slam on her candidacy.

Here’s the first version of the story that ran over the wires:

ANCHORAGE — The teenage daughter of Alaska Gov. Sarah Palin, whose quest for the vice presidency began to go downhill the day she announced the pregnancy, has given birth to a son, a magazine reported Monday. Bristol Palin, 18, gave birth to Tripp Easton Mitchell Johnston on Sunday, People magazine reported online. He weighed 7 pounds, 4 ounces. Colleen Jones, the sister of Bristol’s grandmother, told the magazine that “the baby is fine and Bristol is doing well.”

This is an analytical judgment that doesn’t belong in a straight news story. In fact, it’s a slam that’s made so high up in the lede that it comes before the actual news event being covered! In addition, the remark itself demonstrably false because Palin’s popularity continued to rise after the announcement of the pregnancy. Someone at the AP must have thought that this was just a little too blatant partisanship, even for them so they re-wrote the lede later that morning.

ANCHORAGE, Alaska (AP) - The teenage daughter of former Republican vice presidential candidate Sarah Palin has given birth to a son months after the announcement of her pregnancy became one of the first dark clouds to swirl over the Alaska governor’s candidacy.

That was no better and still as obvious, so finally they gave up and re-wrote it the way they should have written it in the first place:

ANCHORAGE, Alaska – The daughter of former vice presidential candidate Sarah Palin has given birth to a son, a magazine reported Monday.

This is just the latest example. In fact, one could argue that the controversy over Bristol Palin’s pregnancy was relatively unimportant—from a political standpoint—except for the constant insistence of the MSM that it was not unimportant, but in fact was alienating social conservatives. While there were some so-cons who questioned her fitness for higher office because of her daughter’s indiscretion, in general most social conservative leaders—and most of the conservative bloggers I read—said it did not affect their assessment.

Another example of the MSM’s distorted coverage of Palin was the way that the impression of Palin by Tina Fey on “Saturday Night Live” became Palin to every liberal blogger and pundit and, through the media, the voting public. Most people still think Palin said she could see Russia from her front porch. She did not. Fey-Palin did. It was a parody of an accurate comment she made that as governor of Alaska she has Russia as a neighbor. No controversy in that. Yet SNL didn’t seem find Obama a worthy target of parody, even with actual whoppers from his mouth, like saying there are 57 states or accusing “bitter” voters of clinging to guns and religion. And so by constant misrepresentation, parody of Palin became “fact.” Nice to see they plan to continue into the new year.