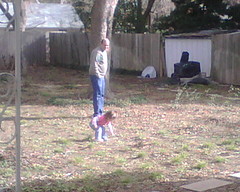 As is our usual custom, we’ve removed ourselves to Austin after Christmas for a visit with Melanie’s family. They’re fun folks and they just adore Isabella, plus the weather is always so much nicer than Boston at the turn of the year. Oh, and let’s not forget the barbecue and Tex-Mex.

We took an early morning flight on JetBlue, although thankfully they’ve moved it back about an hour later than it was last year. We still didn’t get off the ground until about 45 minutes because they had to (a) fix a door latch and (b) pump in some more gas to compensate for a headwind across the country.

Unfortunately that headwind increased our flight time from 4 hours to 4 hours and 45 minutes. Four hours on a full plane with a toddler was daunting; 4-1/4 seemed potentially disastrous. However, aside from a few moments of panic when Momma had to get up and use the lavatory (poor pregnant women and their “urgent need”), she did pretty well. I should have pulled out my laptop a lot earlier, because when I started playing “Finding Nemo” for her about an hour from the end of the flight, she was out like a light.

Meanwhile, I was watching the Discovery Channel marathon of “Man v. Wild”, which I’ve never seen before. What a great show! (I told Melanie that I have a “man crush” on the host, Bear Gryll. It’s nothing untoward, just means he’s so cool, I want to be his best friend.) If you’ve never seen it either, he’s a former British SAS who has also climbed Everest. At the beginning of each episode, he’s dropped into some wilderness with only a knife, a canteen, and a flint and steel, and he must survive until he walks back into civilization. It’s not completely reality, as he has a camera crew with him and they create certain scenarios to illustrate survival concepts, but he still has to get his own water and food and make his own shelter.

Anyway, once we landed, Granddad was waiting for us in the terminal. As soon as we got home, she rushed out into the backyard where he showed her how to gather up pecans from the ground. That’s them in the photo up there.

With all the attention she’s going to get over the next week from her aunt and uncles and grandparents, how will we ever take her back home?

Next week some time, Melanie has arranged a meet-up with other Catholic bloggers in the Austin area, so that should be lots of fun. Other than that, we have no agenda but to relax and have fun.