In bad economy, children are first to go 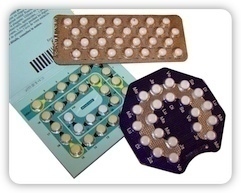 Because children aren’t a blessing, they’re a burden, those who make it their business to ensure there’re fewer kids to feed are offering free contraceptives to those feeling pinched by the economy:

With the economy spiraling downward, one nonprofit wants to make sure someone doesn’t accidentally have another mouth to feed.

[…] As an incentive not to skimp on protection, new patients who sign up before Dec. 30 will receive three free months of birth control. Existing patients can get the deal if they recommend a friend.

“Cutting back on contraception because of cost can lead to the high price of unintended pregnancy,” said Lianne Cook, executive director of Health Quarters.

With winter on the way and people struggling to buy food and heat their homes, Cook said birth control can often take a back seat to basic needs.

“We don’t like people to think of it as a luxury,” she said. “But it can be a fairly sizable expense each month.”

The article says that Health Quarters, located in Beverly, Mass., offers the full range of services including so-called emergency contraception, which is often just a form of very early chemical abortion. And it’s funded by your state and federal tax dollars.

Yes, that’s just what people need in a tough economy: birth control. Reminds me of Planned Parenthood’s reaction to the ethnic cleansing and rape camps in Bosnia: donations of vacuum-suction abortion machines. Or to the earthquake in Pakistan a couple of years ago: More contraceptives and abortion. One-track minds.