How my FitBit landed me in the hospital
15 comments
Share:FacebookTwitter
Technology

How my FitBit landed me in the hospital 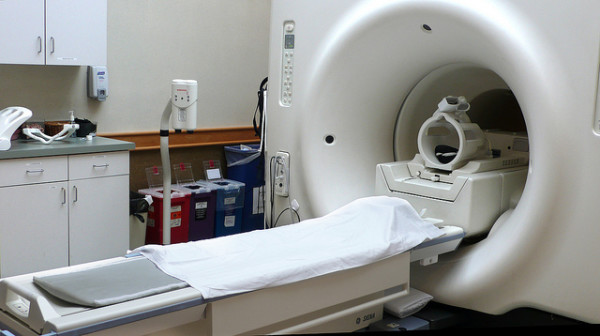 Updated on February 18, 2018: About a year after I wrote the update below, I got myself an Apple Watch Series 1 and never looked back at my Fitbit. Whose band had broken. Twice. I don't wear the watch to bed, but instead let it charge on the bed stand next to me in a cute little Mac charging stand. [amazon_link asins='B01MYNE2BM' template='ProductLink' store='bettnetlinks-20' marketplace='US' link_id='ed91f10c-146f-11e8-9748-9750352deffe']

I know I don't sleep enough. I realize I don't need a watch or fitness band to tell me that.

Updated on February 18, 2016: Well, four years later and I have a new Fitbit (I lost the Ultra a couple of years ago and didn't replace it). This time I have a Fitbit Flex

, which is a slim wristband device. I've been wearing it to bed each night and I'm happy to report that I have not slept with my head against it in such a way as to cause a pressure point on the nerves in my head, leading to numbness in my skull. That is, this time I'm not a numbskull.

Original Post: To be more accurate, the title should say, “How my FitBit may have landed me in the hospital.” But first, you’ll want to know what a FitBit is.

The FitBit Ultra is one of a couple of health-related gadgets from the company called FitBit. It’s a nifty little gadget that clips to your clothing or drops in your pocket. It keeps track of all your activity—walking, running, stair-climbing, and even sleeping. Then it communicates all this data automatically and wirelessly whenever you’re near your computer.

I’ve been trying to be more active lately, but found it difficult to stay motivated. When the alarm buzzes at 6:15am for my walk before work, it’s sometimes easier to roll over, especially when the kids have kept us awake all night. But playing some online games showed me that winning “achievements” and reaching goals were a good motivator for me and so when I saw the FitBit and its system of goals, badges, and accountability Tweets, I thought it would be just the thing.

Now the way it tracks your sleep is that you put a wristband on your non-dominant hand, slip the FitBit inside and set it to sleep mode. Then while you sleep it keeps track of your movements and how often you wake from deep sleep. Now, let’s put a pin in that and come back to it later.

Saturday morning, when I woke up, I noticed my forehead and right front scalp felt numb. I’ve woke with a numb forehead before, which I attributed to sleeping face down on my pillow or arm, but it always came back within a couple of hours. But this time it didn’t. By early afternoon, I still had no sensation in my scalp and it hadn’t got any better (or worse).

Melanie and I decided that I should call the Nurse’s Helpline that our health insurer provides. She asked me a bunch of questions related to both heart attacks and stroke. (This would be the first of a dozen different times in the next 24 hours I would answer these same questions.) She couldn’t say it was nothing and being a very conservative service, she suggested I call the on-call doctor for my primary care physician. He asked the same questions and said I should go to the Urgent Care center for his practice, which he said would be open until 7pm. (It was about 3:30pm by the time I talked to him.)

So I drove off by myself to the Urgent Care center, which is about 25 minutes south of us. When I got there, it turned out that the place closes at 4pm on the weekends. Thanks, Doc. So off I drove to the local hospital’s emergency room (about 10 minutes north of our house).

After giving my situation to the triage nurse, they immediately brought me back in a wheelchair, which I thought excessive. I saw a nurse, then an attending physician. They sent me for a CAT scan that showed nothing. (Yes, ha ha, they found nothing in my head.) So with the numbness still unexplained they thought there was still a real chance of a stroke, and I should see a neurologist… who would only be available in the morning. Ugh.

At first I was told I would be moved from the ER to a room upstairs in the cardiac monitoring unit, so I was fitted with an IV line and EKG electrodes and hooked to a monitor. Then I proceeded to wait. (My brother came to sit with me for several hours that night, for which I’m grateful.) I tried to read, but was too distracted. So I watched some TV and then tried to sleep, which was nearly impossible with all the talking and beeps and alarms and hullabaloo, not to mention the needle in my arm and wires wrapped about me. In the morning the nurse asked me if I got some sleep. Hah! Who can sleep in a hospital?

I never did get moved to the room upstairs, which meant the electrodes were pointless after all. But the neurologist ordered an MRI. Ugh. I’d heard the horror stories about claustrophobia and they were right. They laid me down on the table, put a cage over my face that touched my nose, put on headphones for music (because of the noise), and told me I wouldn’t be able to move for 45 minutes. They then started sliding me into a tube that would put me about an inch away from the sides.

I’d never thought I was claustrophobic before, but I could feel the panic rising. Perhaps the lack of sleep and anxiety over my still unexplained condition contributed to the feeling, but whatever it was, I was almost ready to push the eject button and demand to be pulled out when the technician stopped feeding me into the tube. It turns out my shoulders were too wide. Thank God for my stout build! They pulled me out of the device and told me that I’d have to use the larger MRI in the cancer center next door, which was only open during the week. (This was still Sunday.)

They sent me back out to wait for the neurologist to see me and this time I was sent to a private room. While I lay on the stretcher outside the room, waiting for them to make it ready, I was wondering if Melanie would be able to contact our pastor and have him bring me Communion, since I was missing Mass. Wouldn’t you know it, just a few minutes later I see a man walk by holding a gold pyx. I stopped him, by asking “Are you a Eucharistic minister?” He seemed a little surprised, but said Yes, so I said I would love to be able to receive Communion. The Lord provides.

Finally, I saw the neurologist and we had a good conversation. He did the same tests—touch your nose, follow my pen, squeeze my hand, although pull my finger was new (and smelly); Ba dum bump! I’ll be here all week, tip your waiter—and then suggested that I pinched a nerve. There’s one nerve cluster that controls sensation in the area of the skull that went numb and we agreed I must have slept on it funny. Then he suggested I do a sleep apnea study and I mentioned how the FitBit measures my sleep pattern and started to explain it: “I wear the wristband on my non-dominant hand and put the device inside…”

He interrupted me and said that must be it! The nerve cluster begins in the forehead right about where I sleep with my head on my right wrist at night. I must have slept on the FitBit where it pressed on the nerve ending all night, causing it to go dead.

No stroke. No aneurysm. No Bell’s palsy. No heart attack. No, I just spent about 24 hours in the hospital because I slept on my new gadget the wrong way.

So here I am, home again. At least I didn’t have to endure the MRI after all and now I’ve had a full workup of my heart’s health. And while I didn’t wear the FitBit last night, I think there’s a way to wear it at night without turning me into a numbskull. And even if I don’t wear it at night, it’s still useful for everything else it does.

But if you’re a FitBit Ultra owner who sleeps on his belly, beware of the possible consequences. Here’s hoping the feeling returns to my scalp because at this point it’s coming back, although slowly.

Better safe than sorry, though, right?