Going to the movies with baby
8 comments
Share:FacebookTwitter
Marriage, Family and ParenthoodMedia

Going to the movies with baby 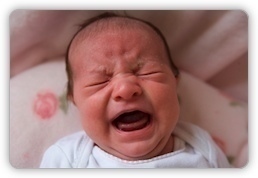 We are those parents. We took Sophia to the movies on Monday afternoon. (N.B. That’s not an actual photo of Sophia to left.)

Melanie and I were dying to see the new Indiana Jones and the Kingdom of the Crystal Skull, and we hadn’t been out to the movies in so long that we decided to chance it.

(How badly did I want to see this movie? For the past month, my Mac’s desktop picture is a mockup of “Indiana Jones’ desk” and my system icons are all props from the movies: fedora, bullwhip, Ark of the Covenant, Holy Grail, etc. Raiders of the Lost Ark, along with Star Wars and Star Trek were extremely influential movies in my formative years and much of my interests and outlook come from them. I’ve been waiting for this movie for years.)

When Isabella was newborn we took her with us to a couple of movies— X-Men and something else, I can’t remember—and despite the noise, she slept right through both. Of course, that window of opportunity closed within a couple of months and we haven’t been back since. But we thought that Sophia is such a good sleeper normally that maybe we could do this, even thought she’s a little older now.

We dropped off Bella at my sister’s house where she could play with her cousins all afternoon and not miss us one bit, and then headed to the theater. We went to the 4 pm showing, which with it being Memorial Day was not quite empty, but not quite full either. We sat all the way in the back row and on the end and no one was closer than 10 feet or so. Still, I was quite nervous the whole time.

Even though Melanie could nurse the baby when she would start to fuss, sometimes she just cries until she’s burped or has a dirty diaper or is just cranky. I was fully prepared to have to abandon the theater mid-movie and hurry out in the walk of shame under the full glare of the other patrons.

I know, I know! It’s inconsiderate. It’s the sort of thing that make people without kids mad at people with kids. But I really, really wanted to see this one movie in the theater with Melanie and we just can’t leave Sophia with a sitter since she’s not taking a bottle and not really on a regular schedule.

In the end, the fussing was minimal and mainly confined to the louder parts of the movie, which, let’s face it, was most of the movie. I doubt anyone noticed her. The guy on his cell phone a couple rows in front of us was probably more disruptive. Melanie is the real hero, keeping the baby fed and even changing her on her lap in the dark.

And the movie? It was exactly what I expected. I kept my expectations low, considering that nothing can measure up to the originals, especially with the passage of the years. No spoilers here, so I’ll just say that the premise was interesting, but not quite what I look for from Indy. Indiana Jones and the Lost Continent of Atlantis would have been good or even the Lost City of El Dorado, as long as it as less, well, without spoiling too much, like X-Files. I also think a lot of plot threads were left untidy, bad guys who came and went rapidly, character arcs left unfinished, and so on. But, in the end, I did enjoy this movie as a summer popcorn blockbuster movie that entertained me for 2 hours and let me live the adventure with Indiana Jones one more time.

Photo credit: iStockPhoto. Not a photo of Sophia or Isabella.