Oops, it’s been nearly a month since my previous gardener’s notebook entry. So what’s happened since then? Well, I’ve nearly killed off all my plants and the rest are in the ground. But let me back up some.

The experts say you should harden off your plants before moving them outside by putting them out in the sun each day, but bringing them in at night. That seemed like it would be a hassle with 72 plants, but what the heck, in for a penny, in for a pound. And so one overcast, breezy day around the middle of May I moved most, but not all (thank God) all my plants outside. And when I’d come home that afternoon, they were nearly all dead! It wasn’t too cold that day but I guess the wind, as minimal as it was, just killed them. A few of the plants were salvageable and I brought them all in where they covered the dining room table. 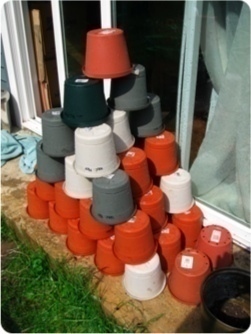 Pots stacked for drying after being washed.

Happily, the most robust tomato plants were still in the house, on a bookshelf in the office, looking out the front window. For some reason they loved that spot and grew like crazy there. Spooked as I was by the disastrous hardening, I kept those plants inside and then waited, deciding only to bring them outside to transplant them.

The next step was to decide where exactly to place the garden boxes and what exactly to fill them with. I elected to move the boxes from where I’d originally placed them on one side of the backyard to the other because, as I saw the leaves come in on the trees, it seemed that what I thought was a good place was going to end up very shaded. Meanwhile, the other side, while shaded part of the day, got good morning and midday sun, only falling the shade in the mid-afternoon, when the sun would be the hottest in the summer. Over they went.

Now, as you may recall, I had started out following the philosophy found in the book “All New Square Foot Gardening”

, but I ran into some trouble as I calculated the soil mix I would need. The author, Mel Bartholomew, uses a very specific formulation he calls “Mel’s mix”, which is equal parts compost, vermiculite, and sphagnum mulch. For my 3 four-square-foot boxes, I would need 8 cubic feet of each. In addition, Mel says you need at least 5 different kinds of compost in order to ensure a good balance. But when I went to buy these materials, I couldn’t find them. Sure the mulch was easy enough, but the stores I went to had nowhere near 8 cubic feet of vermiculite nor did they have five different kinds of composts. Most had only one kind. The very helpful owner of a local garden center advised me that the mixture I was making would be way too fluffy and light and pointed out that there was no soil in there at all. 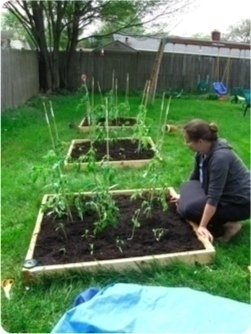 Melanie ties the plants to stakes. Note the ersatz stake in the back left made from a driveway reflector.

In the end, I mixed together 6 cubic feet of topsoil, 2 cubic feet of vermiculite, 8 cubic feet of mulch, and 8 cubic feet of a manure/plant matter compost. It wasn’t too dense, but it had enough heft to give the plants something to hold onto. Underneath the boxes I put down some weed barrier, which blocks weeds from growing up through the soil, but doesn’t block air or moisture. (I was a bit saddened to think of that beautiful grass I was killing.) Then I laid out a big tarp and threw a third of each of the components into a pile in the middle. Using a combination of shoveling and rolling the tarp ends up, I gave it a good mix and then shoveled it into the first box. I then repeated for the other two boxes.

By this time, I was worn out and it had taken a lot longer than I’d expected. Melanie had been helping as much as a 8-month pregnant woman can, but I was hauling heavy bags back and forth, not to mention stopping to mow the lawn and spray insecticide on the ornamental bushes out front. (The rose bushes had been decimated by aphids already.) So I elected to put off the transplant yet another weekend.

Thus, this past Memorial Day weekend, we trooped outside with the remaining tomato plants as well as the pepper and tomato plants that had survived the “Great Hardening Disaster”. then a quick trip to Lowes for stakes to hold up the tomato plants (where I bought one too few somehow). And then we transplanted, with me shoving the stake in and digging the hole while Melanie planted them and tied them off. Isabella wanted to help, but I had to keep warding her off from digging in the boxes. For spacing, we put them somewhat closer than the square-foot gardening method would have us do, which would have meant only 4 tomato plants per box. Instead we put in 6 per box with room left over for 3 or 4 pepper plants each. In the end we had 17 tomato plants in the boxes, plus a couple week survivors in large container pots. (We also lost one in transplanting while another died soon after.)

It’s been a week now since we planted them, a week of rain and clouds and mild temperatures, down into the 50s at times. The plants look pretty sad at the moment, droopy and yellowish green. I’m hoping it’s the rain, cool temps, and lack of sun, but I’m afraid we might lose them all. That would be a bummer, having started off so well with 72 plants, but I went into this as a rank beginner with no expectations. I wasn’t sure a single seedling would make it into a bigger pot.

Meanwhile, I have some basil growing in a pot on the bookshelf next to a little cilantro. These seem to be doing well, so we’ve decided to start some indoor greens. We ordered seeds for kale, mustard greens, arugula, radishes, beets, purslane, and sorrel. We hope to harvest them as micro-greens so the radishes and beets don’t have to grow very big at all. These would be nice if we can sustain them.

(N.B. You’ll note I didn’t mention the six tomatillos. As expected these didn’t fare well. Only one scraggly plant is left, but I don’t know if it will last long.) 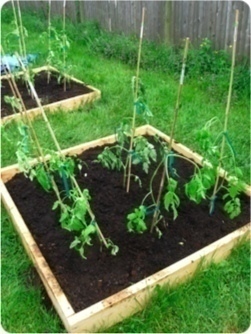 My sad-looking but still living plants.

So now we wait for the weather to turn decidedly warmer. We’ll water and weed and wait for the first tomato and pepper blossoms to appear. I note that many people I read about in the newspapers around here are just starting to put their gardens, although many I know just buy plants and transplant them. We have a little head start though. Will it mean early fruit or early heartbreak? Only time will tell.