Okay, so I meant to update my gardener’s journal more often than I did. On the other hand, nothing’s in the ground yet so I’m not too upset with myself. Here’s what’s happened since my last post in mid-March. When we last met, I had planted my seeds in the starter box and set them under the grow light. We’d chosen a mix of tomatoes, hot peppers, and tomatillos, 72 separate plants in all. 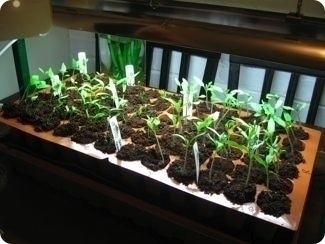 The seedlings popped quite promptly and by the end of March the tomatoes and tomatillos were 2- to 3-inches tall and the peppers were either still emerging from the soil or about an inch. It was about time to start transplanting the tomatoes into something with a little more room, but we encountered a problem. I could only find six-inch diameter pots at Home Depot, Lowe’s, and the local gardening center. And with 72 plants that’s a lot of pots. Nevertheless, we emptied the shelves of as many as we could find, bought some potting soil, and started transplanting. 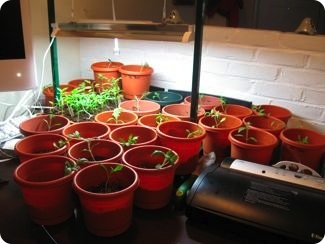 That’s when we encountered our second obstacle: Where do we put all these pots? At 6-inches in diameter, 72 pots takes up a lot of space! More than our kitchen table can hold. We had two solutions. First, we cleared off the top of the bookcases in front of the window in the office and put as many as we could there, after first putting down a layer of wax paper to protect the surface. At two deep, we could fit exactly 18 pots perfectly. And back on the kitchen table we could fit 30 more pots under the grow lamp. 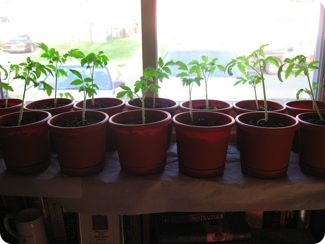 The second solution was to sacrifice some of the weaker plants. We’d already pruned out the extra seedlings in each module so that only one was growing, but with limited space we had to cull some more and thus the smallest of the plants of each type were pruned. I suppose the third option is to do nothing, which we did for some of the peppers, leaving them in the flats for a later transplant. Since hot peppers take so long to mature anyway, I didn’t think leaving them there for now would be a problem.

Now, at the beginning of May, I’m looking toward the next step, which is to actually plant these in a garden. I’ve consulted the charts and it looks like May 15 is a safe “last frost” date for our area and so that’s my target date for outside planting. I’ve already constructed my garden boxes. I bought 3 twelve-foot lengths of 2”x6”, cut them down into 4-foot lengths and then used decking screws to fasten the corners. I’ve also purchased weed-control matting to go underneath. Now, I’m buying my peat moss, vermiculite, compost, and top soil mix to fill them. 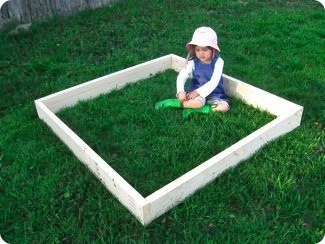 Then, into the ground the plants will go. I’m a little worried that strict adherence to spacing guidelines will mean I can only plant a maximum of 12. Maybe I’ll experiment and see if I can nudge them closer. So that’s where we stand as of the first weekend in May. Stay tuned.