My last gardener’s notebook was over a month ago, but that’s mainly because there was nothing to report. We’ve just completed the coldest, wettest, darkest June ever and while everything is now green, there wasn’t much gardening to do in the dark and rain. In fact, I was getting worried that the tomatoes and peppers were getting too much watering. But not to worry. They’re going gangbusters now as you can see. 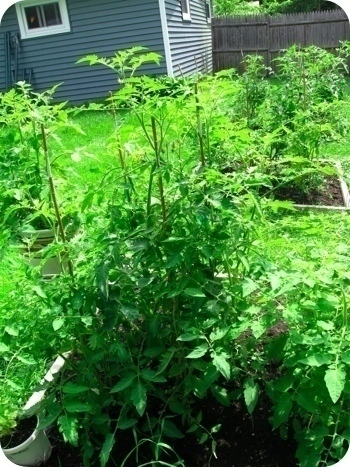 We still have most of the plants with us that we put into the ground. One or two died right off, but the rest are flourishing, including one tomato plant we put in a big container pot we had. The good news is that all of the tomatoes are sporting buds and a bunch already have small green tomatoes. Of the handful of jalapeño plants that survived, one so far has a big bud on it, but because of the rain and cold weather I think even the early-varieties are going to be quite late this year. 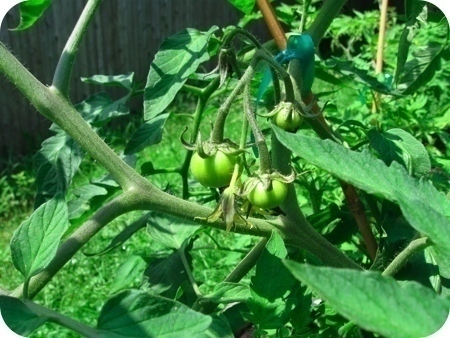 We’ve turned our attention now to weeding and trimming the plants. I’ve seen some advice sites which say that once the tomato plants are 3’ tall, you should trim all the branches from the bottom foot to put all the energy into the top fruit-growing branches. Meanwhile, despite the landscaping cover I put down under the soil of the beds, grass is managing to make its way up to the surface.  However, I hope that means the tomato and pepper plants are getting their roots down past it. Now, I just have to teach Isabella that not all the small plants in the beds are weeds. She accidentally pulled up one of my pepper plants the other day, although it didn’t come all the way up and I’m hoping it will recover. 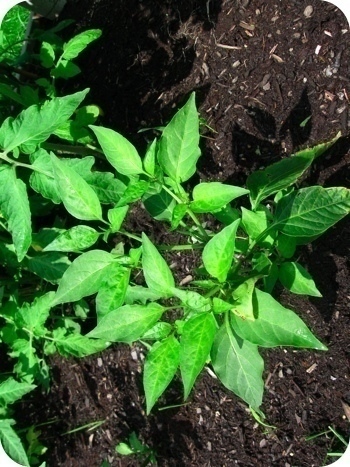 So for now, it’s weeding, watering, and waiting for the fruits of our labors to come in. I can’t wait. So any advice on how often I should water the plants now that’s it not raining every day?