Dropbox pulls it all together
Share:FacebookTwitter
InternetTechnology

Dropbox pulls it all together

Melanie and I are the very picture of the modern web-connected family. We both have blogs (hers and mine), Twitter accounts (hers and mine), and Facebook pages (hers and mine). To those social-media outlets, we post photos from Flickr (hers and mine) as well as videos from our YouTube and Vimeo accounts. And to create all this content, we use our digital point-and-shoot, our Flip Video cam, and my iPhone. That’s a lot of stuff to manage.

In the past, when she was using my old broken-down iBook, Melanie had to rely on me to download photos and videos and then upload them so that she could post them on her blog or Facebook or Twitter, which didn’t always work out so well. Too often she had to remind me a time or two or three. Now that she has a newer MacBook she can edit movies if she wants and manipulate photos with ease. She’s even started using my old iPod touch.

We haven’t solved the entire problem (we’re still doing the memory card dance: “Did you download all the pictures from this memory card so I can delete everything?” “I’m not sure. Leave it on my desk so I can check.”), but a few rough edges of the annoyance of having to manage all this content have been sanded off. Part of the solution is a web-based application called Dropbox.

The folder/directory that follows you around

Dropbox is an amazing tool that I use nearly every day. If you ever have to work on more than one computer or if you ever share files with other people, then Dropbox is for you. Here’s a short video that explains in plain language how Dropbox works.

One of the best features of Dropbox is the shared folder. This is a folder within your Dropbox that you explicitly make available to certain people. If they are Dropbox users it shows up in the Dropbox folder on their computers. If they’re not a Dropbox user, they can signup for a free account. (And if they sign up, you get some extra storage space for inviting them.) Basic free accounts start with 2GB of storage. Not bad.

I set up a shared folder with Melanie called “Dom+Melanie” and we use that to share photos and videos and other files. I recently listened to an episode of the public radio show “This American Life” that had a segment I thought Melanie would like so I cut out that portion of of the show and saved it as an MP3 audio file in our shared folder for her to listen to. The best part is that all she has to do is open the folder to get the file; Dropbox automatically synchronizes the folders behind the scenes.

Dropbox also makes me look good at work. My boss was giving a presentation and as we were getting ready to go to the conference room, I dropped a copy of the presentation in my Dropbox folder, along with other important files. When we got to the room, my boss realized he hadn’t put the presentation on a thumb drive to load it on the computer used for projecting the presentation. No problem, I said. I logged in to my Dropbox account via the web browser on the presentation computer and downloaded the file right there. Problem solved. Hero for a day.

Here’s where it gets really good. Dropbox now has a free iPhone app. Now you can access the contents of the Dropbox from anywhere, not just when you’re at a computer. You can open several common file types, including PDF, text, Word/Excel/PowerPoint, MP3, video, and more. (You can’t edit them. It’s read only.) Remember that show segment from “This American Life” that I’d saved for Melanie to listen to later? She hadn’t got around to it by Saturday, so while we were driving on a family outing we listened to it, streaming from the Dropbox on my iPhone, which was connected to the car’s audio system. How cool is that? usually you’d have to futz around with putting the file in iTunes and synchronizing it to the phone (and remembering to synchronize the phone before you left), but here it was, available at the spur of the moment.

Going back to the beginning of this blog entry, the iPhone app also helps with the photo problem. When I see a good picture, maybe a cute photo of one of the kids, there isn’t time to run and get the camera. The moment will have passed by then. But I almost always have my iPhone on me. So I whip it out and snap the picture. Great! Now I have to rmember to synchronize the phone with my computer, download the photos to iPhoto, and then email them to Melanie. Not anymore! See that camera icon in this Dropbox app? Click on it and it will offer to take a photo or use one that’s already on the phone and upload it to your Dropbox. So now, I can snap a picture and drop it right in our “Dom+Melanie” shared folder where Melanie can grab it and upload it immediately to her blog. Or Melanie can take photos at home and drop them in the folder so I can see them right away at work, without having to wait until I get home. 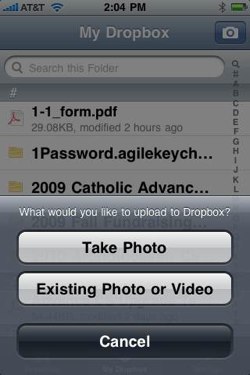 Why not just use email?, some will ask. Because email is unpredictable. Sometimes a message gets to your recipient immediately, but the vagaries of the Internet can delay it for hours. In addiiton, most mailboxes have size limits, so sending multiple files or anything over about 5 MB is problematic. And let’s not forget the propensity of spam-filtering software to put important messages in your junk-mail folder.

What else can it do?

The potential uses for Dropbox and its iPhone app are limited only by your imagination. I can see myself at the store wondering if a particular product is the one Melanie wants. So I take a photo, put in Dropbox, and call her. She can look at it right away and steer me in the right direction. (Now, if only I could get Melanie on an iPhone, it could go both ways. Hmmm.) Another way I use it right now is to back-up our kitchen computer. We have an old iMac mounted on the wall in the kitchen that we use for recipes and to keep shopping lists. The only important data on it is the recipe database so I keep that in the Dropbox folder, which is backed up whenever I back up my MacBook Pro. Since every computer sees it as just another folder on the computer, it gets backed up by my backup software. I could go on and on, but I’ll leave it there.

If at the end of this, you’re saying to yourself, “I need me some Dropbox!”, then I offer you this link. If you sign up at my referral link, not only do I get more storage space for free, so do you! And if you find that 2GB is just not enough storage space, they offer reasonable paid accounts starting at 50GB at $10 per month. (They really should have a 20GB/$5 per month level, but that’s a little quibble. It’s definitely worth it.)