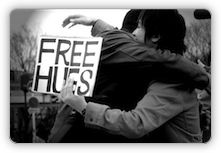 During daily Mass today, the priest in his homily said that since we’re all one big happy family, we should hug one another during the Sign of Peace. For my part I said to my buddy sitting next to me, “Don’t even think about it.”

Yes, I hear all the time how stiff and frozen we New England, European-heritage Catholics are, especially compared to our Hispanic brethren. Hey, I thought we were all about cultural diversity. Well, in my culture we don’t get all huggy with strangers and mere acquaintances. At least, I don’t.

I have several reasons for my stance. For one thing, this was a Mass at my workplace in the new Archdiocesan Pastoral Center. Even though this is a religious celebration, I think it would be inappropriate for me to start hugging my co-workers. Second, while the people to my left and right were men—in which case a biff to the shoulder is as close to a hug as they’ll get from me—in front and behind me were women, including three much younger, unmarried women.

Maybe I’m old fashioned or just over-sensitive, but out of respect for my wife, as a policy with rare exceptions, I don’t hug women outside my family, especially younger unmarried women. (One exception was last Friday when one of my long-time temps left us. She wanted to give me a hug in thanks and goodbye and I agreed since it was her last day and it seemed to be the thing to do at the moment.) It seems to me that a hug is just too intimate to be shared with just anyone, only one step removed from a kiss. You may say I’m being silly, but I say that it’s a partially a byproduct of an oversexualized culture and partially my own desire to make hugging more than just a fleeting fancy.

Maybe I’m old fashioned or just over-sensitive, but out of respect for my wife … I don’t hug women outside my family.

Several years ago I volunteered in my parish’s youth ministry program and the youth minister, an old friend, insisted that the adult volunteers should be giving all the kids hugs whenever we see them because they don’t normally feel the love from the Church. (Suffice to say that this was pre-2002.) I flatly refused because that just seemed like he was asking for problems. Sure enough, the program’s decline started about the time one of the volunteers was revealed as showing too much interest in one of the kids. Nothing illegal, immoral, or even unethical, just … inappropriate.

Now, if you’re one of those affectionate people who likes to hug everyone you meet, that’s fine for you. But keep in mind that there are those of us out there who don’t feel the same way, so please don’t get offended. It’s just not my culture and cultural differences aren’t bad. They’re just different.