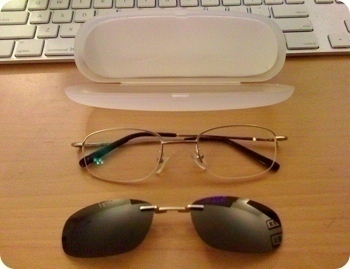 Back in May, when I found out that I was going to need prescription eyeglasses for the first time, I wrote about the fact that it’s possible to buy very inexpensive eyeglasses online. And by that I mean $25 for the whole package versus $200 or more. Since most vision insurance plans have a limit on how much they’ll reimburse you for new glasses and often limit you to a new pair every two years, these inexpensive glasses could be a very useful way to replace lost or broken glasses or to keep a spare pair around. And most of my online research found satisfied customers of the major online retailers.

Yet after all this research, I didn’t actually get around to ordering cheap eyeglasses for myself until December. It was always one thing or another and I had a hard time picking a style and so on. But finally I decided that I need a spare set of glasses in case I lost or broke mine—let’s just say we’ve had a few close calls with the kids—and I could really use some sunglasses. I dealt with the summertime sun, but the glare off the snow in the winter was really what convinced me.

Luckily I’d thought ahead about to this very moment and I’d asked my optometrist for my prescription when I’d first gone in, even then I had to get the all-important pupillary distance by looking over her shoulder. Eye doctors don’t like you buying your glasses online for a lot cheaper than they’re selling them.

Anyway, I ordered my glasses from Zenni Optical. Both glasses, including options like magnetic sunshade, anti-refletive coating and the like, with shipping came to a total of $60. That’s about $30 per pair of prescription glasses! The order was placed on December 8. On December 23, I received an email notification that my glasses had shipped from California. I received them via First Class mail on December 28. Not a bad turnaround.

So the all-important question: How are they? I really like them. The next time I order sunglasses I’m going to make sure I get ones where the lenses are a little larger. That’s the downside of ordering online: not being able to try them on before buying. I’m also trying to figure out how to adjust the other glasses so they don’t slide down my nose. Another downside: No optometrist to provide the final fitting. But then I just saved hundreds of dollars for the price of those slight problems. And to answer the next question, Yes, I will be buying my next pair of glasses from online too.