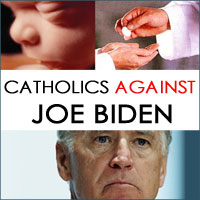 Hot of the web presses, so to speak, we find Catholics Against Joe Biden, a new blog by Stephen Dillard, Chris Blosser, and Jay Anderson. Following on the successful Catholics against Rudy (Guiliani) blog, this is a non-partisan effort to point out reasons why Catholics should not vote for Catholic politicians who openly and flagrantly cause scandal because of their dissent from non-negotiable Church teachings that intersect with public policy. In most cases, but not all, this means abortion.

Now that Biden is the vice-presidential nominee for the Democratic Party, it is time for faithful Catholics to stand up and say that we will not be pandered to, that the act of choosing someone who may sit in a pew in a Catholic church on Sunday, regardless of his public beliefs and actions, should convince us to vote for him. Likewise, I would fully expect that if John McCain chose a dissenting Catholic for his VP spot, they would get the same treatment. Neither does it mean that a non-Catholic with the same beliefs would be more palatable.

But when it’s a fellow Catholic and we’re being told that this makes it okay, then we need to stand up and say it is not. I encourage you to bookmark the site, save the RSS feed in your feed reader, link to it, and put a banner on your site, if you have one.