If you can’t say something nice, don’t be a boor
2 comments
Share:FacebookTwitter
InternetTV and Movies

If you can’t say something nice, don’t be a boor 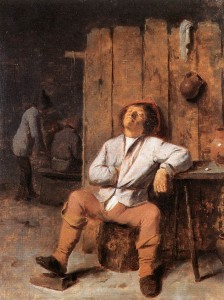 A Facebook friend[1] the other day posted a link to a story about an actress who had died. It wasn’t someone you’d know by name, but you’d recognize their face and perhaps express some surprise and a normal amount of regret, as in “Oh, that’s sad. I liked their work.” Or you’d do that if you weren’t a boorish troll on the Internet.

The very first person to comment on his post started by saying, “Never heard of her.” Okay, not exactly condolences and while they could have just clicked the link to find out who she is, it’s not exactly lazy, boorish behavior… yet. Then another commenter adds Standard Catholic Comment on TV-related Posts No. 1: I don’t watch TV any more. Then adds the qualified and obligatory wish for her soul to rest in peace “along with all the nameless and no less important people who died today.”

Really? Look, if you don’t care about the deaths of famous people or about TV stuff in general, here’s some simple advice: Shut up. Keep it to yourself. Frankly, it’s just rude to do what these people did. Remember your mother’s adage? If you don’t have anything nice to say, don’t say anything. If all you have to share is the equivalent of “I don’t care about what you posted”, then move on and keep your fingers off the keyboard.

It is the height of self-centeredness that when you encounter someone noting the death of someone else whose work they enjoyed, you make it about yourself. And that’s precisely what these people did. An actress died and one person says he never heard of her and the other proclaims her disdain for TV. It’s not about you!

Yes, famous people are not members of our family, but it’s a perfectly human response to show regret and sadness at the death of someone whose artistic work you enjoyed, no matter how low and unworthy you consider that work. I’m no fan of hiphop and rap, but I appreciate that some of my friends still mourn the loss of Tupac Shakur. I would never dream of showing up on their Facebook pages to mock them for their musical taste.

Boorish trolls bloviating on social media–including so-called conservatives rejecting “the world and its glamour”–do more harm to our culture than good.