Book Review: The Glory of the Crusades
1 comment
Share:FacebookTwitter
BooksIslam

Book Review: The Glory of the Crusades 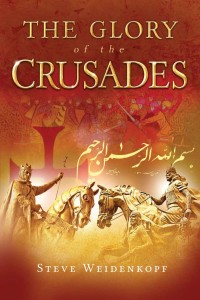 From the time I was a child, I had a passing interest in the Crusades as part of that exciting time of knights and chivalry known as the Middle Ages. They showed up, sometimes tangentially, in many of the books I read, including Robin Hood and Ivanhoe and others. Later, I read about them in connection with current events involving the Middle East and Islamic terrorism. And of course, I absorbed the prevailing narratives about the Crusades that cruel hypocritical Christians slaughtered peaceful Muslims in the Holy Land (not to mention Byzantine Christians as well) in the name of Christ and conquest.

I didn’t really begin to seriously challenge those narratives until I read Hilaire Belloc’s The Crusades, written in the beginning of the 20th century, long before the rise of post-WWII radical Islam and yet prophetic about that future. Belloc’s book was good, but is based on century-old scholarship and really only covers the First Crusade, essentially ignoring those of the next six centuries or so (depending on how you count the Crusades). I looked at other histories of the Crusades as well, but all of them approached the subject from an essentially neutral secular academic outlook.

The new book, The Glory of the Crusades by Steve Weidenkopf, on the other hand, provides a look at the complete history of the Crusades, combining the latest scholarship with a distinctively Catholic viewpoint that explains the phenomenon frankly, but without the a priori hostility so often found in popular treatment of the Crusades.

He begins by addressing the common myths about the Crusades right up front. Noting that the currently accepted narrative about the Crusades accepted in the English-speaking world comes from a Protestant perspective followed by anti-religion Enlightenment philosophy, which was built upon by an anti-colonialist ideology in the 20th century and the current apologetic in the face of Islamic extremism, Weidenkopf outlines the seven myths to be debunked:

His responses were good and among other things, emphasized the reality that Christians had a different way of thinking about violence in the defense of the Christian faith than they do today, and in fact the word “crusade” is a distinctly modern appellation, whereas those who actually engaged in the practice saw it as an armed pilgrimage. Weidenkopf notes that “it was the teaching of the Church for nearly 700 years that men had a moral obligation to take the cross in order to liberate and defend Christian territory.” Modern approaches to the crusades, even from orthodox Catholics, seem to have difficulty with the idea that the crusaders would have primarily religious reasons for going on crusade, as opposed to primarily mercenary or bloodthirsty impetuses.

In fact, it was the rise of a militaristic Islam bent on conquest that provoked the response of the crusades and specifically it was the destruction of the Church of the Holy Sepulchre by the Calpih al-Hakim in 1009 and the persecution of Christians in the Holy Land. This prompted Pope Urban to call for the the First Crusade in 1095, an action that would change the world.

Weidenkopf takes us through each of the crusades–although the definition of crusade got looser over the centuries, Weidenkopf sticks mainly with the various confrontations with Islam–and details both the successes and failures. He doesn’t shrink from the abuses perpetrated by crusaders, but he delves into the hows and whys, dismissing the overly simplistic tales of horror and revealing the truth of the various actions and motivations on both sides.

I was struck time and again how often it was one decision, one bad move, that would doom a crusade and set back the cause. I also learned some new things myself, including the fact that the famed Saladin was never considered a great warrior by his own people, but it was Christians who elevated his legend, even to the point of naming their children after him! It was only after the rise of Islamic extremism in the 20th century that Saladin became a legend in the Middle East, and specifically it was Saddam Hussein who styled himself a new Saladin, both of them coming from the same town in Iraq.

I also enjoyed the exposition about both King Richard the Lionhearted–an English folk hero who, it turns out, was born in France, spoke mainly French, and spent little of his life in England–and King St. Louis IX, the example par excellence of a Catholic king who was said to be the “perfect crusader” and about whom it was said the 13th century was his century more than any other of his contemporaries.

So what about that word “glory”? Are the crusades glorious or are they something of which we should be ashamed? Weidenkopf writes that he uses the word in the same sense as the Hebrew word for glory used in the Old Testament kabod, which means “heavy in weight.” Thus to write of the glory of the crusades is write of their importance to history.

To recognize the glory of the Crusades means not to whitewash what was ignoble about them, but to call due attention to their import in the life of the Church.

Given the many ways the memory of the crusaders has been used and abused in both popular culture and in violent ideologies, we owe it to ourselves to understand the truth of them.

But the time has arrived to change this narrative and present to the modern world the authentic story of the Crusades. For that to occur, Catholics must first learn for themselves the authentic story of the movement that was an integral part of the Church’s history for six centuries. Too many see the Crusades as an aberration in Church history, a sin that should be forgotten and never discussed, swept into the dustbin of history along with equally misunderstood historical cases such as the Inquisition, Galileo, and Pius XII and the Jews. For many Catholics, “the wars of the cross have become like a lingering bad smell in a lavishly refurbished stately home.” The Crusades were an inherently Catholic undertaking. They were promoted by the papacy, encouraged by the clergy, and fought by Catholic warriors. An authentic understanding of the Crusades, rooted in a contemporary perspective, is best achieved by those who believe today what the Crusaders believed. Catholics are uniquely positioned to understand the glory of the Crusades, and to help those outside the Church begin to see it.

Weidenkopf’s The Glory of the Crusades is a good place to start.