Benedict back in the hospital and in the Globe
2 comments
Share:FacebookTwitter
Personal

Benedict back in the hospital and in the Globe 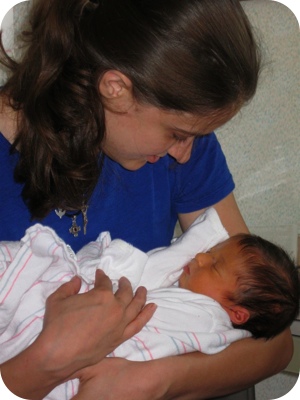 It’s been 5 days for Benedict Joseph so far and an eventful 5 days it’s been, including an appearance on the Boston Globe’s web site. For those not following me on Twitter or Facebook, here’s the scoop. Mother and son came through admirably and everything has been pretty smooth except for one thing (we’ll talk about that in a moment). On Sunday, Melanie and Benedict came home from the hospital a day earlier than the normal 4 night stay.

Frankly, Melanie was tired of the hospital and wanted to be able to sleep in her bed, uninterrupted by nurses. A baby waking every few hours is bad enough but the nurses seem to be timed to come in as he’s falling asleep. The nurses do a good job, but like waiters there seems to be an instinct for approaching you at the worst time.

Isabella and Sophia were understandably ecstatic and were excited to have Mommy and Benedict home. Sunday night was a bit difficult for Melanie as we learned how we need to readjust our room for Benedict and his paraphernalia. Moving furniture is in my future.

On Monday, Benedict had a doctor’s appointment. The staff at Caritas Norwood were a bit worried at his color and his bilirubin numbers. That’s an indicator of jaundice, which is the inability of the body to process dead red-blood cells. He was borderline on Sunday so they let him go as long as we scheduled a followup with our pediatrician. At the doctor’s office on Monday she realized she didn’t have the right kind of blood vials so she sent us across the street to South Shore Hospital in Weymouth. First, I have to say what a great-looking hospital. Very busy but efficient. Free valet parking, hospital guides to take you where you need to go, efficient admitting personnel. By comparison, Caritas Norwood felt sleepy and quiet.

Later on Monday I got a call from the pediatrician who said Benedict’s bilirubin numbers had jumped in 24 hours and if they jumped a similar amount in 24 more he would enter the danger zone. She said we had to take him immediately to Norwood and have him readmitted. So off we go again on a moment’s notice. Poor Sophia and Isabella barely got to spend time with their mother and brother and poor Melanie was separated from her girls again. At the hospital they put Benedict in a special light bed and Melanie stayed with him overnight while I’ve shuttled back and forth between the girls and Melanie and Ben.

Today his numbers are lower than they were on Monday but not as low as they were on Sunday. Even so, that’s progress and the doctor hopes he can go home on Wednesday. We’re praying!

Meanwhile, Michael Paulson, religion writer for the Boston Globe, contacted me last week, asking me if he could write up our story about why we named our on Benedict. I was happy to do so and he’s posted my response on his Articles of Faith blog. It’s entitled “It’s a (Catholic) boy! Meet baby Benedict”. Enjoy! And thank you everyone for your prayers and advice.