A clue for the kids occupying the streets
1 comment
Share:FacebookTwitter
EconomicsNational politicsPolitics

A clue for the kids occupying the streets 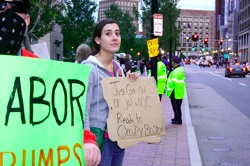 I’m guessing there will be no consequences for the students who miss a big chunk of their semester protesting in the streets.

“A lot of us are already in debt and we haven’t graduated yet. A lot of my friends, even though they work 20 hours a week, that is not enough to cover their expenses,” said Rick, a 19-year-old psychology major. “A lot of us can’t even afford to get sick.”

Hey, Rick, join the club. You’re not the first generation of college students who had to go into debt. But here’s the thing: You made a choice to go to college. You knew what the tuition was. You knew you’d have to take loans. But you made a value-judgment weighing the cost versus the benefits. (At least I hope you did and you didn’t go to college because you were aimless and lacking in direction or you just wanted to extend your adolescence.)

You could have taken a job or enlisted, saved up money, gone to school later. 20 hours per week? I know people who worked 40 hours per week or more on top of a full schedule. Sure, there’s isn’t time for partying (or street protests), but for them the hard work and sacrifice will pay off. Or you could have looked for a full-time job and gone part-time at night. It might take you longer to get that degree, but you’d have the satisfaction of knowing you didn’t have to take a handout to get it.

Bottom line, Rick, is that life’s not fair. There will always be somebody with a bigger salary, a better car, a nicer job. So what? Get over it. Stop worrying about what the other guy’s got and start making your own way. Think of anyone you know who’s a success (someone who worked for it, not had it handed to them in an inheritance or they cheated their way into it). I’ll bet they worked hard, didn’t complain too much about what the other had that he didn’t and took advantage of every opportunity. That’s the American dream, baby, not sleeping in a makeshift hobo camp, complete with WiFi and catered smoked salmon and cream cheese bagels for breakfast (from actual news reports).

The thing is most of the rest of America agrees with one key aspect of your protest: We, too, are sick of politicians in bed with corporate executives who get special access to influence and our money. But the difference is that most of us want to fix it with less government, not more. More government, in the form of bailouts and special industry regulations and arcane tax codes, is what got us into this mess.

Hopefully, someday you’ll realize all this, when you have your own family and mortgage and job that occupy your time. When that time comes, let’s have a beer and I’ll show you around the Tea Party rally where you can meet the rest of us. The 99% you so fondly speak of.