Unpacking in the new apartment is … progressing. It’s devolved into a campaign against the boxes in which the line of fire moves from one room to the next. As one room is cleared, the next becomes the battleground. The boxes are opened and we decide what needs to be accessible and what can go into the basement.

The irony in our new place is that we have so much room in the basement even as we have less room in the living spaces and so we can afford to send boxes of stuff (important stuff; stuff we want or need to keep) downstairs. 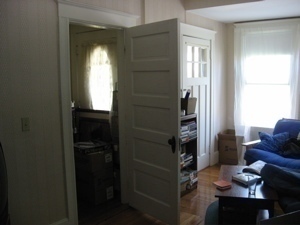 We have an odd little space in the living room, a sort of extra front entryway that we’ve turned into a closet. These old houses are full of little quirks from before they were subdivided into apartments. This place has a little entryway right next to the regular main entrance. The landlord thinks it has to do with this apartment once being used as a doctor’s office, but I think that the front of the living room used to be a closed-in porch or sunroom and that at one point it was incorporated into the rest of the room. Anyway, we don’t need two front doors, so we’ve turned it into a storage closet for office supplies and books that are being mooched away.

The living room is mostly done with a few lingering things to clean up here and there. The kitchen is likewise done, the first room to be done so we could at least cook meals. The dining room is next, I think, because the table is covered in boxes related to the office and computers (where will I put it all?) and the rug needs to go down underneath.

Isabella is having a ball in the new place. She loves the fact that the windows are low enough to look out, especially when she climbs into her little chair. And with the ice cream shop next door and the busy street out front, there’s plenty to see.

She also loves the giant, fenced-in yard. Melanie likes to taker her out there, but because the yard is so big, she can’t just sit one place. It only takes a moment and then Bella’s around the corner of the house and out of sight. Unfortunately, because we’re now in a new town, Melanie can’t take Bella to their favorite park anymore. Non-residents have to pay $10 to park there during the summer, which is a shame.

So, I said to Melanie this morning that I bet that we’ll get the last box unpacked just as we need to start packing again for our expected move next summer. I certainly got a glare from her. I know how she feels. At least now I know what to do next time.