Throwing the highchair out with the bathwater
3 comments
Share:FacebookTwitter
Marriage, Family and Parenthood

Throwing the highchair out with the bathwater 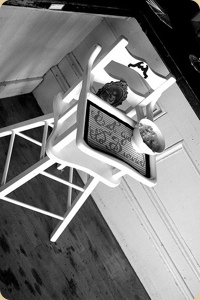 What is it with the manufacturers of child & infant products, like highchairs? Sometimes it seems like the people designing and marketing these things don’t have kids of their own. Take our high chair, for example. It’s a Graco, one of the less expensive, mass-market brands. We bought this particular chair four years ago just before Isabella was born and it’s served both Sophia and Benedict too.

It’s not a bad high chair, although there was a recent recall that replaced some screws that were prone to work themselves out of their places and added a piece of fabric that attaches to all four legs to prevent the chair from doing splits if another piece of plastic breaks as it apparently could. As a side benefit, the fabric acts as a convenient tarp for catching all the food that falls from the tray. Ick.

Keep in mind that while two of these trays are in use—because you can’t use the top removable tray without the removable part that attaches to the chair (It’s getting difficult to describe this; Click the zoom button on this chair and you should see what I mean)—the third tray has to be stored somewhere. But what’s really annoying is that the trays are light enough and don’t actually snap onto anything that a 1-year-old child can easily get his hand gripped on the edge and flip it off. Yeah, we know this by experience. So early on we stopped using the little trays and just serve food right on the regular tray, which washes just fine in the sink and can go right back onto the chair when Ben is done.

So the two extra trays are pretty useless. But what would be nice to have an extra of is the seat cover. That seat cover gets downright nasty with ground-in, mushed banana, pasta, Cheerios, and a miasma of fruits, vegetables, and proteins. The problem is that there’s only one of them and you can’t use the chair without it. So you either have to remember to pop the thing right into the wash as soon as he’s done with dinner to have a hope that it will be ready by breakfast or else hand wash it in the sink as best you can, wring it out, and then hope it dries by morning.

So we get two trays that are essentially useless and only one seat cover that would great if we had a second.

Now, maybe these folks really do use their products because I see that at least some of their highchairs come with a second seat cover. They’re fast learners, these baby gear manufacturers.