St. Anthony P.I., or how I learned to stop worrying and love the saint
2 comments
Share:FacebookTwitter
Faith and Liturgy

St. Anthony P.I., or how I learned to stop worrying and love the saint 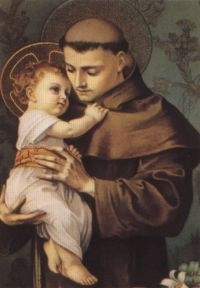 I’ve been relying on St. Anthony a lot lately. First, there was my wallet, which dropped out of Melanie’s coat pocket into 18 inches of snow in the backyard. I’d lent it to her when she ran into the store for essentials after Mass on Sunday a couple of weeks ago. We got a blizzard the next day, I lost track of it, and when I asked for it as I was leaving for work the following day, it was gone. We searched and searched, but no go. We said a quick prayer to St. Anthony, then while I was at work (canceling all my credit cards, alas), Isabella took it on herself to go search the backyard (18 inches of snow!) and, lo and behold, she found it! And it’s not like Melanie didn’t both go tramping about the yard looking for it.

The second lost item was an important file on my sister’s computer. She’d used the Stickies program on her Mac to keep a lot of very important data (don’t do this, by the way; it is only intended for temporary data, not permanent) and now it was gone. One of her kids must have closed the note. Now, the program does prompt you to save the note as a text file first, so I tried searching her drive for a saved file, but nothing came up. And of course, her backup program hadn’t been actually backing up. (She misunderstood how it was supposed to work.) So, I told her to use Evernote from now on, instead of Stickies and wished her well reconstructing her data. Well, instead she turned to St. Anthony and—lo and behold!—he came through again. She found the text file we’d been searching for with all her data intact.

Fast forward to last week. We got another snowstorm last Wednesday and on Thursday, as I was getting ready to head out to work, I started my car to warm it up, cleared off ice and snow from the windows, then went back into the house where my eyeglasses promptly fogged up. So, I set them on top of my head—or rather, on top of my wool cap where they perched precariously. I gathered my computer bag, went about the house giving goodbye kisses, and then went outside to the car. As I settled into the car seat, I reached up to get my glasses and… they were gone. I search the car, front seat and back. I re-traced my footsteps around the car, and back into the house, to all the rooms I’d been in. Nothing. It was possible they’d got flung off their precarious perch into a snowbank, in which case I wouldn’t see them until the spring thaw. Grumbling at my own stupidity, I pulled out my backup glasses and went off to work.

This morning, as I got in my car again, I thought, “I haven’t prayed to St. Anthony about these glasses yet.” And that ever-present skeptic in me pooh-poohed the idea, telling me not to be superstitious, that St. Anthony is not the keeper of some heavenly private detective service, seeking out lost keys and glasses and wallets throughout the world. I told the inner skeptic to pipe down and said some kind of perfunctory prayer—“St. Anthony, can you help me out here?” or some such—then backed out of the driveway. As I was driving away from the house, my hand drifted down to the center console where it landed right on my glasses.

Had I simply overlooked the glasses in my frantic searching before? Maybe. Nevertheless, I believe that God also opens our hearts to see Him and the work of the saints and angels on our behalf in the world around us. It must be a terribly lonely thing to have a completely materialistic and ultimately nihilistic worldview. For me, it’s a great comfort and joy to be surrounded by a cloud of witnesses, including a few looking out for an absent-minded dad.

By the way, it’s probably also no coincidence that Melanie is due to give birth to a boy on February 24 and that we’d already decided to name him Anthony.